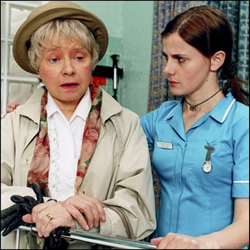 When Fin and Comfort are called to a blazing building with children trapped inside, Fin makes the shocking discovery that his daughter is one of them, as the medical drama continues. At the scene, a man asks Fin to help his wife, who is ill in a nearby car. Fin refuses, saying his daughter is his priority. He enters the building, saving all of the children and is hailed as a hero back at Holby. But the man he refused to help earlier tells Fin that his wife has died and he is holding him responsible.

Nina is traumatised by the previous week’s events and arranges to stay at Abs’s place for the night to take her mind off things. They are about to kiss when a surprise visitor interrupts them.

Bex, meanwhile, sneaks off for an hour of passion with her new mystery man.

On Roxy’s last day, she tells everyone that she has decided to go and work with children, leaving Holby for good.

And Luke attends a call from a woman who has been beaten up by her partner.

Prunella Scales guest stars as Jocelyn, a woman who poisons a man who keeps burgling her house… and drinking her milk.