Maggie goes home to check on her father, Stan, and finds him in the garden. She arrives just as he trips and falls into the pond, hurting his shoulder. At the hospital, Maggie tells him about the care home and he agrees to go.

Meanwhile, it’s Selena’s first day back at work following her attack. She doesn’t appreciate being fussed over by her colleagues, but later in the shift suffers pains.

Elsewhere, Guppy accuses Harry of being involved in the medical trial. Harry is outraged and denies everything but, as Guppy tries to apologise, Harry throws him out.

Later, Claire puts a present in Luke’s car and finds a VHS tape in the glove compartment. She watches it in the staff room and is shocked to discover it’s the CCTV footage of Bex pushing Pete own the stairs.

Over-eater Mark, collapses in a supermarket after being caught shoplifting. Kelsey discovers he suffers an eating disorder which makes him always feel hungry, but Abs is annoyed when he isn’t informed. Mark’s condition deteriorates and he dies. His mother feels guilty, having left the supermarket after he was accused of the theft, however Kelsey does her best to comfort her.

Friends Kenny and Paul are inventing a cleaning fluid at an allotment, when the shed explodes. Kenny is seriously injured so Paul goes for help. At hospital, Kenny’s nagging wife irritates staff with her behaviour and assumes Paul has just run off and left him. But he is later brought in after being found collapsed near the allotment. Kenny asks his wife to leave.

Manic depressive Elsa is brought in with her friend Sue after cutting her head. Sue is shocked to discover she was attempting suicide. Elsa feels she has been a burden on Sue and on her advice decides to seek professional help. After Sam talks to Sue, he is seen chucking away his own medication.

* Woody chats up Kelsey on her first shift. 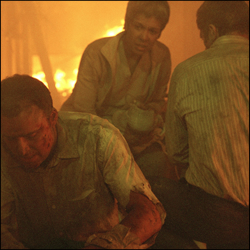 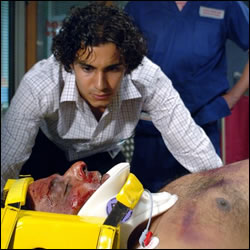