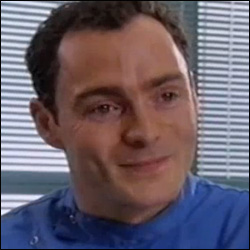 Meyer and Nick have heard that Darwin Ward is going to split so that half of the ward can be used as a general surgery ward. As a result, they are returning earlier from a conference in Florida and are on the flight back. The flight seems to be quite eventful, with a man with a fear of flying and two drunk men on the flight. There’s also a little girl who sticks her tongue out at Meyer, to which he responds by sticking his own tongue back at her.

Nick is alone in economy class and is sitting next to a couple. Nick decides to use the bathroom but the queue is too long so he goes in the bathroom in first class instead. On the way back, he greets Meyer and wakes him up – and Meyer threatens to sack him! When Nick returns to his seat, the woman in the couple he has been sitting next to (called Eleri) has been in the bathroom for a long time. They get into the bathroom and find out that she’s experiencing a bleed and it becomes evident that she is seven months pregnant. Nick calls Meyer and he says the bleeding can’t be stopped without removing the baby. They work out that by the time they’ve landed, Eleri will have died from a loss of blood. Meyer says they have to perform a Caesarean and the couple agree. Meyer stops the bleeding, but Eleri is still at risk.

Unaware of the heroics being performed in the plane, Darwin Ward is giving blood as they are having a competition with another ward to see who can give the most blood. Victoria is being chatted up by Danny, a new HCA who is working on the rival ward.

Kirstie has an HIV scare when Ray accidentally stabs her with a needle that has already been inserted into an HIV positive patient. However, Kirstie takes a test and the results are negative. [ID 593]Karen[/ID] wants to know why Kirstie was tested, but Ray tries to help Kirstie by saying it was his fault and tells her what happened. Karen is angry and demands an incident report.

Jasmine’s back at work after her stabbing incident. She talks to Julie about her pregnancy, and says she wants an abortion. Julie tries to persuade her to have the baby, and when Julie bumps into Carl – she tells him that Jasmine’s pregnant. Carl then bumps into Jasmine in the canteen and says she has no right to abort his baby. Jasmine is furious that Julie told him and they have a fight in public, resulting in Karen sending Jasmine home.

Meyer and Nick arrive back at the hospital, with Eleri and her baby daughter. Meyer wants to know how Darwin is doing with the blood donations compared with the ward which Danny’s working on. Karen says it’s a draw and so Meyer tells Nick to go and give blood.

Julie goes round to Jasmine’s flat to apologise. Jasmine accuses Julie of only wanting her to have the baby so that Julie can take Jasmine’s job, telling her that she’s always been jealous. Julie is about to leave when Jasmine collapses, clearly in pain.