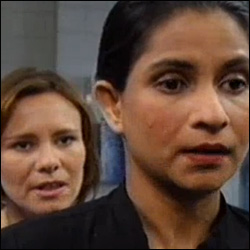 Victoria is persuading a boxer called Sammy to stay in hospital and have an operation, despite the fact it would jeopardise his career and he would have to miss a fight. Victoria suggests to Meyer that she might call some people to suggest new career prospects for him. Meyer tells her she’s not a Career Advisor and should be working on the job she’s trained for. He says that he’ll be relying on her much more until Nick’s replacement arrives.

Tash is reluctant to get a lump under her arm checked out, but Kirstie urges her to. Seeing a patient with breast cancer, however, convinces Tash that an appointment would be a good thing. She admits to Kirstie that she’s scared, so Kirstie says she’ll go with her.

Mike decides that they need a team-building activity and so he arranges an outdoor course which consists of them spending 24 hours in the wild. He chooses Julie, Jasmine, Kath, Danny and Ray but Ray says there’s no point in going as he’s off to Dubai – but they talk him into it. Danny asks Jasmine out and tells her that him and Julie have split up, but he neglects to tell Julie this!

Hanssen is thrown when Sahira’s seriously ill father is admitted to Keller and he tries to avoid treating him. Cameron is backed into a...