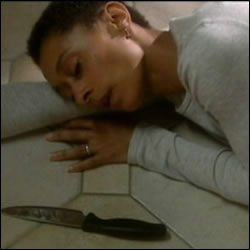 It is Sam’s 19th birthday and Fleur has arranged a party at Tess’s house. However, Tess is shocked to get home and find disco lights and DJ decks. When she warns Fleur that they cannot have loud music because of the neighbours, Fleur flies off the handle. Later, she pours Tess a glass of wine and apologises. Tess drinks but becomes disorientated and dizzy, collapsing on the floor. She calls out for help to Fleur, who stands above her, holding a kitchen knife.

Elsewhere, Woody becomes a hero when he realises the new paramedic, Simon, is an impostor, and Nina breaks the news about her ex, Sarah, to Abs. He is shocked and doesn’t know how to handle the news.

Meanwhile, Jas is at work packing his belongings away. He tells Guppy never to contact his family again – they are disowning him.

Harry informs staff that Charlie has taken another sabbatical. And Ellen offers to baby-sit for Harry when he next needs to go out.

Josh is observing in the ED as part of his paramedic refresher course. An elderly lady, Louise, is brought in after suffering a stroke. Her husband, George, is devestated when she dies and is adamant that no post mortem should be carried out. Josh misinforms him that this won’t be a problem. Ellen comforts George.

Bob Docker arrives in the department with toothache, however he hopes to also do research for a story he’s working on about ghosts in Holby. When Selena tells him he has angina, Bob leaves, thinking she was playing a joke on him because of his other motive for being there. However, when he is brought back in after collapsing, the realisation becomes clear.

Two sisters are brought in after a fight with eachother. Kylie’s injuries are just superficial, however her sister Janine’s injuries are more severe when she is found to have a tampon stuck down her throat which restricted her airway. When the mother arrives, she assumes a local paedophile has attacked them and at first Kylie goes along with it. Until Selena suspects they fought eachother after a bite on Kylie’s arm came from someone wearing braces, which Janine has. Kylie later owns up but admits she was fed up of her sister teasing her about not having started her periods.

* Louise Tunstall- dies of a stroke

* Selena keeps her calm with Ellen following her affair with Will. Harry explains to Ellen ‘You were used by Will as much as she was’.

* Sam is celebrating his 19th birthday.

* Fleur buys Sam a shirt and some trainers for his birthday.

* After Harry tells Josh about Charlie taking a sabbatical ‘A change is good for everyone!’. Josh retorts ‘Is that a hint?’

* Jas is furious with Guppy ‘I warned you if you weren’t with me, you’re against me’ and disowns him, saying his mother will do the same, ‘How could she possibly love a son who’s destroyed me?’

* Abs pushed Nina away after the news about Sarah, ‘Do you expect me to sit around till you break my heart?’

* When Woody realises Si is an imposter, he buys some fluffy handcuffs from a nearby shop and handcuffs him to the ambulance.