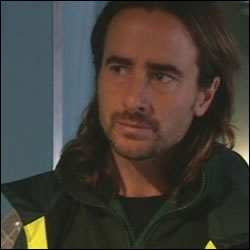 Following a fight in a pub, Dixie calls Greg a liability for going into the pub before awaiting police back up. Maggie takes her pregnant daughter into hospital after suffering brackston hix. Her mind is not on the job when she misdiagnoses patient Steve, who has a chest injury and Zoe has a go at her.

Tess is struggling to run a department of work-to-rule nurses, and gets a surprise when Kelsey turns up to do overtime as an agency nurse. Meanwhile, Ruby, a little girl previously helped by Greg, arrives with her parents to give chocolates and flowers to the staff that looked after her.

Elsewhere, a graffiti artist falls from a bridge into the road below, causing a massive crash. Greg arrives at the scene but struggles to deal with the situation on his own. Working his way through the injured, he discovers the car belonging to Ruby and her parents, Chloe and Mark, who were on their way back from delivering presents to A&E. Chloe has been empaled in the stomach by some metal – she dies at the scene infront of her daughter.

To make matters worse, the team discover one of the vehicles had a toxic spillage which causes Ruby’s condition to deteriorate in CRASH and they are unable to save her. Mark is distraught after losing his family.

As the number of casualties forces Tess to close the department. She feels terrible when learning an elderly man, Horace, has died en route after being diverted to St James. Tess takes her anger out on Abs, who is pressuring nurses to stick to the work-to-rule. Whilst Greg confides in Dixie that he felt helpless at the crash site and doesn’t want to do the job anymore. Dixie consoles him, but Greg is adamant – he wants to leave Holby.

At the end of shift, staff discover a graffiti murial outside the hospital of the team. Ruth is upset and bewildered to see her picture has no face.

* Chloe Waterson – dies after being empaled with metal.

* Toby asks Maggie ‘So what’s it going to be Nan, Gran or old mother Coldwell?’