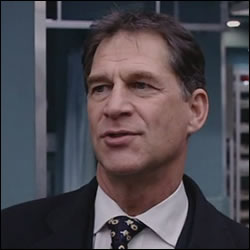 After releasing details of Ruth’s diary to the press, Harry must deal with the fall-out. As Marylin panics over the headlines, Harry tells the team that today is his last day. Elsewhere, Charlie is hard at work at the private Edwalton ED, and is taken aback when two patients suggest his talents are being wasted.

That afternoon, Marylin holds a press conference, where she reveals that Harry has been asked to leave. After Adam rejects Harry’s offer to take over, Harry comes up with a plan. He says an emotional farewell to the team before going to see Charlie, asking him to come back to Holby.

Later, Toby visits Ruth for the first time since she’s been in ITU. He spots her diary and can’t resist reading it aloud, but he gets angry when he reads what she thought of him. As Ruth opens an eye and pulls her hand away from Toby’s, he realises that she’s coming out of her coma.