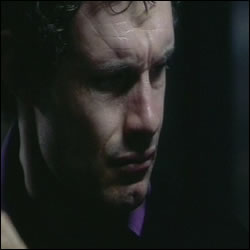 Nathan’s premature baby, Angel, is fighting for her life in the Special Care Baby Unit. Doctors discover she is suffering an infection and her organs are failing. Nathan faces the heartbreaking decision to take her off the ventilator and his daughter dies in his arms.

The department also sees the arrival of the new Consultant in Emergency Medicine, Dr Adam Trueman. His unorthodox entry raises some eyebrows and he certainly makes an impression – especially on the female staff.

On this particular morning, during his daily run, he sees and saves a mentally-ill woman, Lauren, who is threatening to jump from the top of a multi-storey car park. Lauren, who was recently sectioned, has kidnapped her baby son, Rhys, from his father, Ian, and injured Ian’s mother, Maureen, in the process. At a building site, she hides her baby and attacks Ian with a metal pole. Later, whilst all being treated in the hospital, Maureen decides to take Lauren back to the building site to find the baby. Maureen is hit by a digger whilst Lauren retrieves Rhys safe and well from a concrete mixer.

Elsewhere, Guppy is determined to get his nerve back and has almost convinced himself that the patient’s death in last week’s episode was not his fault – then a relative, Patricia, of a dead patient he treated last series, comes into ED, wanting to speak to him. Guppy goes to pieces and he nearly takes the easy option, returning to the oblivion that drugs will offer him. However, he faces down his demons and decides to tackle the situation head on. He then surprises everyone with a shock decision – that he’s quitting.

A boy, Peter, comes into the department with his mother after falling off his bike and injuring his leg. Guppy wrongly dismisses Ruth’s diagnosis but when his condition worsens, Ruth turns out to be right.

Meanwhile, a journalist, Tanya Healey, who witnesses Adam’s rescue of Lauren, turns up at the department on a mission to woo him in order to make a story.

Dixie is recovering in hospital following an asthma attack and is happy to get a visit from Jeff, who reveals he is back working on the paramedic team. However her happiness is short-lived when she learns Cyd has applied for a transfer. Cyd tells her their relationship has become too intense and they both need distance between them.

* Maureen Bunce – glass cut to head and later a more serious head injury from being hit by a digger.* Ian Bunce – head injury.

* ‘So you’re back on the team?’ Dixie says to Jeff. He jokes ‘Looks that way you old bat!’