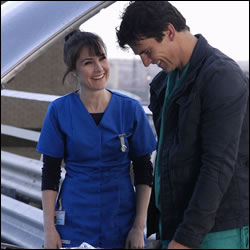 Jessica and Sean’s home life is revealed. Jessica gets the kids ready for school, whilst Sean prepares for work. Sean’s mind, however, is on other things as he sends Zoe a text asking to see her.

In the ED, Kelsey, Adam and Ruth are getting ready for their shift. Ruth has returned to work and is starting back on clinical duties, but she is apprehensive. The staff are surprised to see Zoe in early, for once – she has decided to turn over a new leaf, which means there is no room for Sean in her life and she deletes his message without even reading it.

Elsewhere, a 14-year-old boy jumps from the emergency exit of a bus and is hit by an oncoming car. Zoe, Sean and Jessica have to work together to deal with his injuries and memory loss.

Meanwhile, Abs’s friend, Stacey, loses his job and consoles himself with a drink. He later burns his arm and ends up in the ED, but when Abs confronts him on the state of his liver, he gets into his car, despite still being drunk, and tries to drive off – narrowly missing Abs.

Jessica later turns down an invitation from Adam, but he is determined to impress her and make her see what she is missing. With Alice as his accomplice, he whisks Jessica away for lunch in his car. The lunch has been cooking on Adam’s car engine – which Alice has had to drive around the car park for an hour. Jessica is won over and they share a kiss but, catching sight of her husband, she breaks away. Adam walks off, and doesn’t look back.

In this article:Cas Series 22, Rachel Flowerday