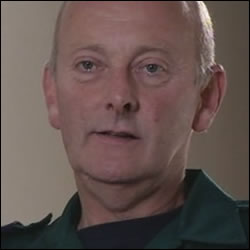 Josh is getting ready for work when he receives a call that Laura Merriman, who attacked and stabbed him, isn’t fit to stand trial. Memories of the attack come flooding back to him and it is clear that he isn’t well. Meanwhile, Dixie takes a call from the local estate and, although she’s concerned about Josh, they go ahead.

There is a scuffle among a group of boys and two are injured. Mes, who has been bullying Mateuz, has a stab wound and the knife is still in his arm. Josh freezes, visualising his own attack, and starts hyperventilating, so Dixie calls another crew to help. Meanwhile, Mateuz, who has also been stabbed, calls his mum from a phone box. He pulls out the knife from his leg and throws it away.Jeff and Greg take over, leaving Dixie to drive Josh to ED. He doesn’t want Devika to know what has happened, but, sensing something is wrong, she forces her way into resus and finds him. Forced to confront his feelings, Josh again asks Devika to marry him, but she says she wants to go back home to India, and that she wouldn’t expect him to give up his life here.

Mes is brought into ED and Toby starts to treat him. Toby is using a new blood gas machine, being trialled by Harry to cut down on costs. If the trial fails, Harry will be forced to find other ways to make cuts within the department – and he is stunned to be told this may mean he has to lose either Tess or Charlie.

Mateuz arrives at ED for treatment to his leg. Jeff, having found a mobile phone in the ambulance, gives it to Tess, who discovers that the fight has been filmed. She hands the evidence to the police, despite protests from Mateuz’s parents.

Meanwhile, someone is writing a derogatory blog on ED and suspicion falls on Adam.

In this article:Cas Series 22, Stephen McAteer