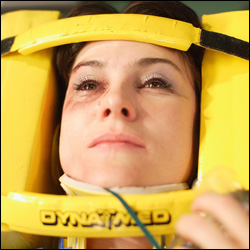 Jessica is rushed into resus following her fall at home. While Adam treats her, he tries to hide his shock as he discovers that she is more than five months pregnant.

Adam later conspires to talk to Jessica, as he realises he could be the father, but Jessica is steeled with a renewed commitment to her family. The moment shared between the pair doesn’t go unnoticed by Sean, who starts to put two and two together.

Ruth’s lack of people skills come into question again. She knows full well she was refused the surgical rotation because she isn’t popular enough, but she manages to connect with a family and starts to open up a little.

Despite being late for work, Zoe impresses everyone in resus – even Jordan. Her success is quickly deflated, however, when she is led away from the ED by police, who want to question her about a hit and run.

Elsewhere, a loan shark sees the error of his ways and convinces a priest to help him make amends, and an upbeat Jay is convinced that he has witnessed a Christmas miracle – until his patient dies.