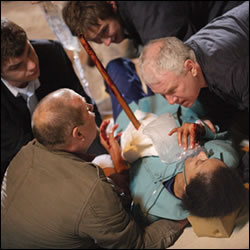 News of Sammy being hit by an ambulance infuriates the residents of the Farmead Estate, who take to the streets. Missiles are thrown and cars are set on fire.

Meanwhile, in ED, the focus is on keeping Sammy alive. Charlie tries to track down Tess, who hasn’t returned from her break. He keeps ringing and eventually tracks down Sammy’s phone, discovering some saved footage. With Noel’s help to play it, they then see evidence of Tess’s horrific condition.

Putting their lives at risk, some of the staff go to the estate. But they have no idea where Tess is, and the residents are threatening. Big Mac joins them and, eventually, thanks to his local knowledge, he recognises Tess’s location.

Back at ED, Adam takes command. His ability to pull the team together makes him the ideal candidate to take over as clinical lead at the hospital. He battles hard in a crowded resuscitation room as the team works valiantly to try to save Tess’s life.