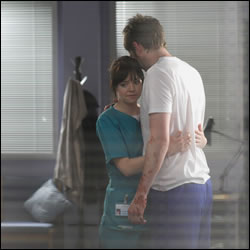 It’s a busy shift in the ED and the atmosphere is full of blame. Zoe is late, Abs hasn’t turned up and Adam has wrongly declared a patient dead. With no boss, following Zoe’s demotion, the staff have no clear leader.

On the local Farmead Estate, a young girl goes back to help a boy in an underpass. He was being beaten up by bullies, but her father made her walk on by. In an altercation she is injured and left semi-conscious. Stacey, a passing drunk, finds her and carries her along the road, where the police take over. As the team prepares to treat her in ED, Adam and Zoe are at loggerheads. Zoe arrived late, but is aware of Adam’s earlier mistake. She blames him and his lack of procedure.

In the midst of their arguing, a tall stranger walks into ED. He hands over his jacket and bag to reception, and authoritatively strides through the double doors into resus: “Hello, I’m Nick Jordan, I’m your new Clinical Lead…” Everyone is astonished. Jordan rolls up his sleeves and expertly takes command of the situation, bringing the order and procedure previously lacking.Zoe and Adam receive a verbal dressing down from Jordan. Ruth is bowled over by the power and leadership that Jordan exhibits.

Meanwhile, Abs is concerned about Stacey, who is vomiting blood.

Dixie and Jeff turn up unenthusiastically for their first appointment with the counsellor, Ben Harding. Hungover and bleary-eyed, Ben turns up late and seems to have no idea why they’re there…