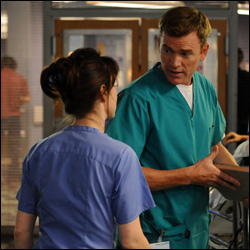 A bank robbery goes horribly wrong and an old face makes an unwelcome return to the Emergency Department (ED).

The F2s are thrilled when the dean announces a Junior Academic Fellowship Award which will see one of them win a role in the ED with a lucrative salary. However, Adam warns them they must still work together as a team and not be tempted by individual success. May, in particular, is desperate to win the award. However, mentored by the impatient Ruth, things don’t get off to a good start.

When a bank robbery goes horribly wrong, injured bank manager, Gal, is brought into casualty with a gun-shot wound. But Gal isn’t quite the hero he first appears and his obsessive behaviour brings back some disturbing memories for Polly. When Gal starts waving a gun around the ED, Polly leaps into action, putting everyone at risk. It’s time for the young paramedic to relive and confront exactly what happened with Alistair in order to get her life, and career, back in order.

Meanwhile, Jordan is keen to return to a more hands-on role in the ED. However, despite the department being at full stretch, Adam won’t hear of it. Medical back-up soon arrives in the form of a rather unwelcome face from the past.

Trevor impresses Tess with his handling of Isabel, a lonely, elderly lady who has been injured during the bank robbery getaway. Tess bravely invites him out on a date but there’s something he’s failed to mention to her.