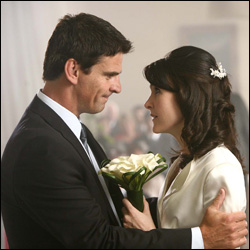 The big day dawns for Adam and Jessica as they prepare for their wedding but Adam is feeling rather worse for wear.

Adam emerges from the on-call room dressed as superman, following a heavy night. He walks past Henry and Zoe with as much dignity as possible but knows Jessica is going to be furious. As he prepares to leave the chaotic ED, he promises Jessica he won’t be late – only to walk straight into the path of a patient, who collapses.

At their country house venue, Jessica waits impatiently for Adam as the guests start to arrive. Charlie races Adam, who manages to wangle a police escort. As the service gets under way, Adam and Jessica get the giggles. But, before they are officially named man and wife, Tess interrupts – there’s been a major road accident. Much to Jessica and the registrar’s disgust, Adam returns to the hospital.

Back at the hospital, Yuki and May are working well in the crisis unit, but Yuki is struggling to forgive May for her recent deceptions. Meanwhile, Ruth is moved by Jay’s sensitive handling of a patient who has been abused. She decides that she’d like to take their relationship further.

As their colleagues finish their shift, Adam and Jessica are travelling through country lanes with the kids. As Jessica chats to Zoe on the phone, Adam is forced to swerve to avoid hitting an oncoming vehicle. The call is cut off just before the car skids, flips and lands on a frozen lake where the ice begins to crack…

‘A Day in A Life’ was broadcast as a single feature-length episode. S24 E19 continues the story.