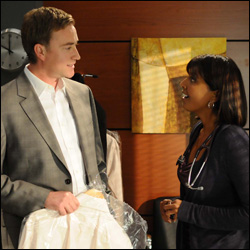 There are two new faces in the Emergency Department this week. Robert Boulter arrives as a handsome young doctor who ruffles May’s feathers; and Hotel Babylon’s Raymond Coultard plays Dr Matt Strong, who has his heart set on Zoe. Meanwhile, a bereavement counsellor gets more than he bargained for from Adam.

May is distracted when a handsome stranger turns up in Holby on a motorbike but, when she sees him in cubicles later, she is her usual snooty self. When the stranger reveals himself as Dr Kieron Fletcher, a young research doctor who’s hoping to apply for the fellowship, May is seriously unimpressed. Kieron turns out to be a more than capable colleague, but just what is sparking his unusual interest in Jordan?

Relaxing after work with a glass of wine, Zoe contacts Jordan to bury the hatchet and offer her full support now that he’s head of the ED. But a bottle later, Zoe is horrified to realise that she’s left a stream of messages about their relationship on Jordan’s answer machine. The next day, fending off the attentions of her admirer, Dr Matt Strong, Zoe is determined to erase the machine before Jordan hears her drunken ramblings.

The ED team, especially Alice, are worried about Adam’s increasingly erratic behaviour but their concern is only adding to his problems. Reluctantly, Adam attends counselling to talk through his difficulties but, when the counsellor provokes Adam to get a response, the first session doesn’t go quite to plan…