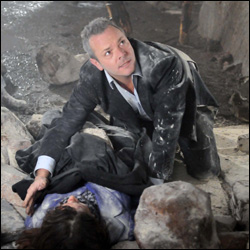 Yuki’s jealousy forces him to take romantic action with May. Jordan, meanwhile, receives a tempting offer from the board and Kieron finally reveals his business with Jordan.With Adam still behaving erratically, Henry approaches Jordan to see if he’d be interested in taking over as clinical lead. Concerned about the effect on Adam’s confidence, Jordan is reticent but agrees to a meeting nonetheless. With Zoe covering the F2 bursary interviews, Jordan is set to attend the meeting – until Kieron secretly dismisses his taxi, offering to transport Jordan on his motorbike instead.

Driving an increasingly furious Jordan to a remote spot, Kieron is determined to get something off his chest – is this his opportunity to reveal just what his business is with the older doctor?

As May continues to flirt with Kieron, Yuki is in turmoil, especially when Lenny tells him that it’s only a matter of time before something happens between them and that Yuki should make a move first. Spurred on by his mentor, Zoe, Yuki slips a love note in May’s locker but gets more than he bargained for when he finds the F2 exam paper hidden in her bag.

Meanwhile, Howard Fairfax and Ruth are concerned when it looks like a patient’s health may have deteriorated due to their clinical trial drug and, for once, Zoe rejects Jordan when he offers to spend time with her after a shift.