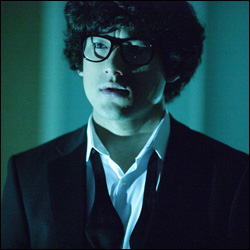 Charlie is about to become a grandfather, Jordan learns the truth about Zoe’s pregnancy and Adam celebrates his 40th birthday after a terrible year.

It’s still the night of the Ludlow Foundation event and a power cut has struck the north of Holby, plunging the Emergency Department into a state of chaos. When Yuki punches Lenny in the face for a second time, after finding out he’s accepted a bribe from Ludlow to be awarded the JAFA fellowship, a fight ensues in the middle of the ED. Called to help break it up, Jordan is quick to work out that Lenny was in cahoots with Ludlow.

Shona arrives at the hospital for a check-up in terrible pain – she hasn’t felt the baby kick for days. Finding her collapsed on the floor in the dark, Lenny and Yuki put aside their differences to help her out, reviving the baby when it’s born not breathing.

After being quizzed about her continued use of fertility drugs, Zoe finally confesses to Jordan that she’s not pregnant. Jordan is deeply shocked and later impassive when Zoe tells him she loves him in front of the entire department. Will he be able to forgive her?

After urging Ludlow to go to the police and confess all, Jordan tells Yuki and Lenny that, despite their good work, there will be no fellowship and no more funding. Will the young doctors ever be able to return to Holby’s Emergency Department?

It’s Adam’s 40th birthday and the ED staff throw a surprise party to celebrate. Adam reveals a T-shirt with the slogan “old, free and single” as the team toast Charlie’s new grand-daughter – baby Megan – and Tess looks on with a smile. Is this a new beginning for them all?