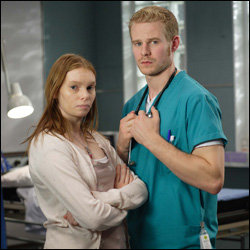 Casualty actresses Sunetra Sarker and Suzanne Packer step out of the limelight and behind the camera to co-direct this episode.

Failing to summon the courage to confront Edward over his affair with James, Ruth heads off to the Emergency Department, where it’s her first day as Clinical Standards Manager. But the gang give her a frosty reception, showing their displeasure over the treatment of Charlie, with Big Mac, Noel and Mads even going out of their way to play pranks on her.

Meanwhile, a married couple, Neil and Lou, are brought into the ED after Neil attacks Lou with a meat cleaver. Ruth treats Lou, while Neil, who suffers from severe night terrors, is taken to Pysch where he is attended to by Charlie. The arrival of Richard, who is a police officer and Lou’s secret lover, complicates matter further. Is Neil aware of the affair and is he trying to use his condition to, literally, get away with murder?

Lenny is pressured into visiting a woman called Helen, but decides against it having left the past behind him. But, he has a change of heart when he treats a young girl who is brought into the ED by her brother. Helen, it transpires, is his sister and she will die unless she receives a bone marrow transplant. Will Lenny give her the chance she needs to save her life?

Meanwhile, Ruth and Charlie remain at loggerheads. Ruth stands by her decision to have him moved out of the ED and she finally plucks up the courage to confront Edward about his homosexuality. Might she be able to turn that situation to her advantage?