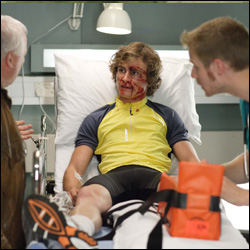 Ruth’s relentless quest to further her career continues as she undermines Zoe by revealing that she is Dr Death – the doctor with the highest mortality rates in the ED.

Ruth takes great pride in revealing the results of the time and motion study which indicate that Zoe is the doctor with the highest mortality rates in the ED. To Ruth’s satisfaction, Zoe goes on to lose a string of patients and uncharacteristically begins to doubt her own ability – until Mads points out another statistic that puts Zoe’s performance in a completely different light.

Meanwhile, Mike, a 17-year-old cyclist, is brought into the ED after being beaten up by a local gang leader. Mike’s leg is badly hurt and his pushy dad, Joe, is worried that his Olympic cycling aspirations are out of the window. When Mike starts going to extraordinary lengths to avoid having surgery, Lenny thinks there might be more to the situation than meets the eye.

Lenny is visited by his sister, Helen, who tells him about a psychiatric evaluation that is needed before he can become a donor. The session brings up all sorts of feelings that Lenny is unwilling to deal with. After a heart-to-heart with Helen, Lenny comes round and even introduces her to the gang. But will the donor match results provide the happy ending they’re looking for?

Elsewhere, a newly reinstated Jeff is back in action and Ruth attempts to organise a morale-boosting trip to the races, but is disappointed to see only one name on the list.

In this article:Cas Series 25, Marston Bloom 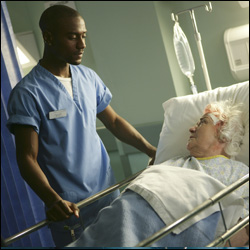 S26 E21 (4 Feb 12) :The One You Love by Marston Bloom Episode Summary Linda struggles to be accepted by her sister’s kids and...