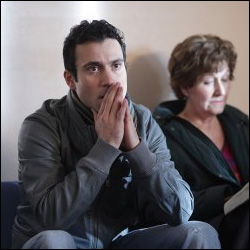 Kirsty and Adam face unwelcome enquiries from the police, Jay’s judgement is affected by his preoccupation with his health and Nita gives Kirsty further cause for concern.

Kirsty and Adam receive an unwelcome visit from DI Collins, who is investigating Warren’s accident. Adam tries to comfort Kirsty by gently touching her arm, which is noticed by DI Collins. Kirsty asks Adam to not mention the domestic abuse: she doesn’t want to be seen as a battered wife. Adam is unsure but, when DI Collins returns, Adam keeps to his word and doesn’t mention the violence.

After his discovery of a lump in the testicular area, Jay is deeply preoccupied and his judgement at work is affected. When he finally confesses his concerns to Miriam, she persuades him to go and see a doctor. But will Jay pluck up the courage to actually go in this time?

Nita, meanwhile, catches Adam comforting Kirsty and, jumping to conclusions, hurries off to school, deeply disturbed by what she’s seen. When Nita’s boyfriend Rich, who’s just attended a sex education class, says he’d like to take his studies a bit further, Nita is horrified and pushes him into a banister, breaking his jaw. Later, Kirsty confronts Nita about Rich’s injuries and Nita tells her that Rich wanted to have sex but that Nita refused because she didn’t want to turn into a slut like her mother. In a moment of madness, Kirsty slaps her.

Checking on her daughter later, Kirsty is distraught to find Nita’s bedroom empty and a note on the bed…

In this article:Cas Series 25, Philip Gawthorne