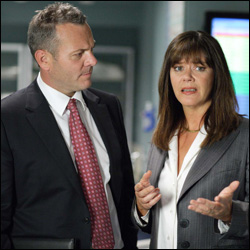 Josie Lawrence stars as a headmistress with a school drug problem; Michelle Collins returns as the mother of troubled shooting victim Simone; and the team struggles to cope with new regulations.

As part of his mission to turn the beleaguered emergency department (ED) around in two months, Jordan introduces a new rule which states that patients should be in and out of the ED within two hours. As predicted, the team is unhappy with the rule. Charlie is annoyed that he wasn’t consulted and Noel is confused by the system. Only Ruth, with her clipped bedside manner, finds the new regulations to her liking.

Schoolboy Taz is brought into the ED after falling from a school building and Zoe suspects he has taken LSD. Headmistress Mrs Haines, who happens to be the mother of Taz’s girlfriend Julie, believes he’s supplying LSD to other pupils. When 14 more students are reported with the same symptoms, Mrs Haines realises she has a big problem on her hands. Could the culprit be a little closer to home than she realises?

Shooting victim Simone is brought back into the ED after falling down the stairs and Kirsty suspects that she may have deeper psychological issues. But Simone’s mother Camille refuses to listen to Kirsty and is furious about Simone’s treatment. Already planning to sue the department over the previous incident in the ED, she now angrily confronts Jordan about the behaviour of his staff.

Ruth falls foul of the new rule system when a patient reveals that she’s waited more than four hours for painkillers. But Ruth has greater problems at home. Confused by new husband Edward’s lack of physical attention, she plans a night of intimacy for the two of them. Will Edward be seduced by Ruth’s charms?

In this article:Cas Series 25, Tom MacRae