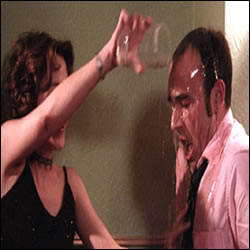 The episode begins with Alan in the operating theatre undergoing an endoscopy at the hands of Mike and Tash.

Liam brings food to Linda and is called away by Kath. Elsewhere, the rest of the staff are getting his leaving presents together and passing around cups for champagne.

Mike finds evidence of oesophageal varices and they suspect Alan of being an alcoholic.

Liam tells Linda that he is leaving for Australia on his honeymoon after he gets married tomorrow.

Ray, Alan’s brother, arrives at Alan’s bedside with several magazines and a bunch of grapes (half-eaten).

Liam is presented with his gifts, a farewell speech from Mike and a Champagne toast.

Tash tells Linda that her gall bladder is inflamed and must be removed and that her hepatitis C seems to be affecting her liver – she has liver scleroses. Linda refuses for any of her family to be rung.

It is revealed that Alan came in after collapsing in a pub. Ray leaves, since Sue (Alan’s wife) is being icy towards him. Ray tells her they were in the park when Alan collapsed.

Liam and the rest of the staff go for a stag night drink at the pub.

Sue comes to see Mike, asking about Alan. She tells him Alan is a recovering alcoholic and asks if Mike thinks he is still drinking.

Linda asks Tash if her medication will make her ill, as her last batch did. Tash encourages her to think positively.

In the pub, Sandy snogs Terry for a dare, not knowing he is Liam’s best man. Liam introduces them.

Kath finds an upset Sue in the toilets. Sue explains that she is worried Alan might be drinking again. Kath encourages her to talk to him.

Alan reassures Mike that he has been dry for 6 months and says he didn’t drink while in the pub. He also says Ray is helping him through it more than Sue is.

Mike tells Kath that he thinks Alan is lying.

In the pub, Terry tries to chat up Sandy. Julie tells Liam that she used to have a crush on him – Liam responds (tongue firmly in cheek) that it was mutual. They both laugh. Meanwhile, Steve is trying to teach a semi catatonic Jasmine how to play pool…

In the middle of the night, Kath finds a bottle of whiskey by Alan’s bed. He insists it isn’t his.

Danny staggers into work with a rancid hangover the next day and takes Linda into theatre.

A taxi brings a (late) Sandy, Jazz and Julie to the country hotel that the wedding is being held at. Jazz and Julie are badly hung over after a night’s clubbing.

After removing Linda’s gall bladder, Mike finds her liver to be badly damaged and takes a specimen for the lab. He tells Tash that the health authority won’t pay for Linda’s drug treatment as it is too expensive, which angers Tash.

At the wedding, things are tense. The bride is running late and Terry is making eyes at Sandy…

Terry shocks Sandy by inviting her back to his room for that night but this is nothing compared to the shock Liam is about to receive: the car of his bride (Liana) arrives but she is not inside, having stood him up at the last moment!

Linda is angry that she cannot have the drug treatment. She reveals she got Hepatitis C via a blood transfusion last time she was at the hospital.

Tash goes to see Euan about getting Linda’s drug treatment. He refuses her request. She gets angry, accusing him of putting cashflow ahead of patient care and storms out.

Alan tries to talk to Sue about what he was really doing yesterday but she makes an excuse about going to the toilet before he can explain. She bumps into Ray and tries to tell him to leave. They start to argue and he tells her Alan was really in the pub when he collapsed. Kath orders Ray to leave and feels compelled to tell Sue about the bottle of whiskey.

Tash tells Linda that she can get her treatment if she moves in with her mother, who lives in a different health authority area. Linda refuses, saying she and her mother do not get on.

Liam rebukes Sandy and Jazz for looking unhappy. He decides to press on with the party anyway. Steve arrives late without his wife, claiming she’s ill.

Sue tells Alan she is leaving him, saying she refuses to give him any more chances. As Alan tries to explain that he wasn’t drinking in the pub, he suddenly starts to vomit blood. Mike rushes him into theatre.

Liam makes a heartfelt speech thanking all his friends for coming and supporting him.

Sue is angry with Ray as she thinks he started Alan drinking again. She is also upset that she didn’t get to say goodbye to Alan properly.

Back at the aborted wedding, Terry is still making advances on Sandy. In a rare moment of seriousness, Jazz reveals to Steve that she was once engaged and Steve in return tells her about his marriage at age 18.

Kath tries to comfort Sue, who is still talking about all the time she spent trying to bring Alan through his alcoholism.

Sandy is still desperately trying to dodge Terry’s advances and resorts to tipping a pint of beer over his head.

May Archer (Linda’s mother) arrives. Tash persuades her to go and see Linda.

Mike gives Sue and Ray the bad news of Alan’s death on the operating table.

May and Linda start to talk, and are at last getting on well again. May tells Linda she was jealous of her ex-boyfriend taking Linda away from her when May’s husband died.

Steve and Jazz nearly kiss but he pulls back and suddenly leaves. Julie suggests to Liam that he should take up a job on Keller ward.

Sue is angry with herself that she didn’t say goodbye to Alan properly. Ray reveals that the bottle of whiskey was his and he left it there by accident. As Mike and Kath exchange guilty looks, Ray is the only one to stick up for Alan, and he shouts at Sue for doubting him. Sue breaks down in tears.

May becomes angry when she finds out the reason Tash invited her there and storms out.

At the hotel Julie, Jazz, Liam and Sandy raise a glass to being single.

Sue and Ray thank Mike for trying so hard for Alan. He apologises that it wasn’t enough.

As Tash is leaving, she sees May return, go to Linda’s bedside and embrace her daughter.

Alan Fletcher (oesophageal varices) – operated on (Bandara, Barrett) twice, but died during the second operation. Revealed not to have relapsed into alcoholism.

> Danny: Sandy, is there anything you don’t ever find romantic?

> Tash: [to Euan the manager] Do not compare what you do with what I do. I make decisions in the interests of my patients’ heath where you go on the basis of balancing the books!

>Steve: [arriving late to the wedding, after Liam’s bride has failed to turn up] Liam – congratulations, mate! Sorry about my wife, she couldn’t make it.

Liam: Neither could mine.

> Terry: Anyone told you how sexy you look when you’re angry?

Sandy: No, but they have said I pour a good pint. [grabs a pint of beer off a drinks try and tips it over Terry’s head]

> Liam: Anyone looking to buy a wedding ring?

Earlier in the series, it was shown that Steve didn’t seem to be spending enough time with his family, devoting more and more of his life to his job. Now with the nearly-kiss with Jasmine, are domestic problems on the horizon?

Also, Tash seems unable to resist going against patients’ wishes – yet again she telephones a relative when she was strictly warned against it. Surely this has to backfire one day?

Other than that, most of this episode’s content may be taken at face value. Poor Liam!

Fenisha and Ethan have kept their distance since Fenisha had the baby, but when their son is rushed into hospital, Fenisha realises that Ethan... 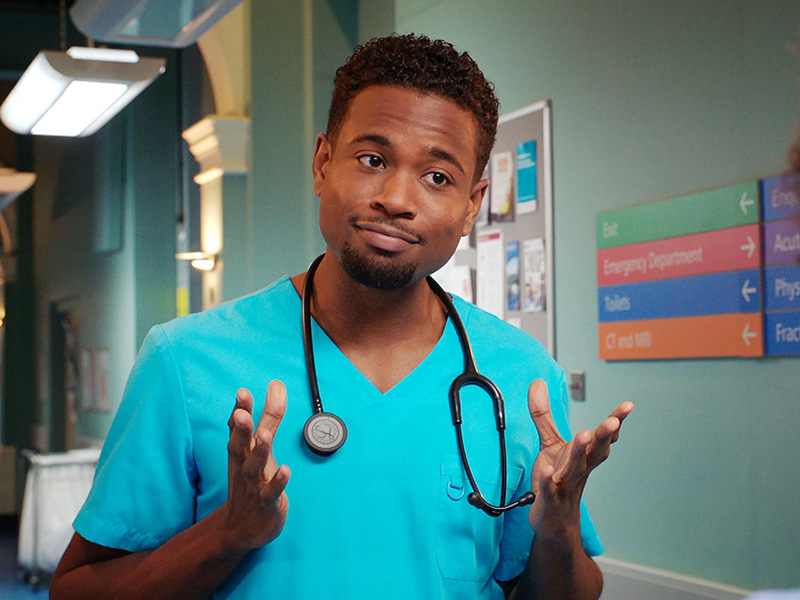 ‘Hard Day’s Night’ : On her first night shift, a hungover Nicky must cope with an overbearing new registrar, while Fletch and Jac are... 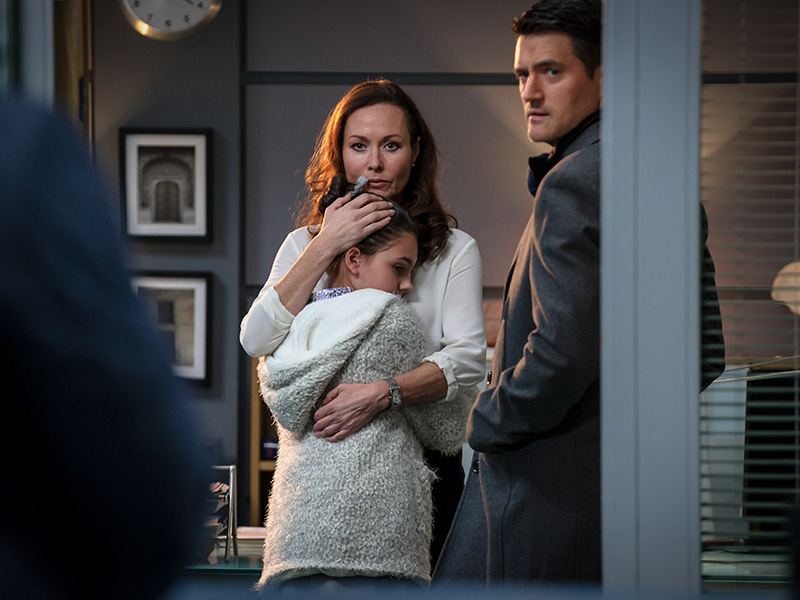 ‘Just Do It’ : Connie is distressed when Grace has a panic attack and things are only made worse when Sam accuses her of... 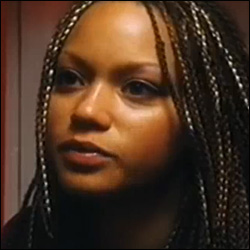