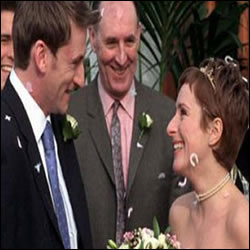 Jasmine and Steve are flirting in the carpark. Steve says that he told Emma that he was working, when in fact he spent the night with Jas. He says he’ll tell Emma tonight that he’s leaving her. Julie is getting a little bit nervous about her wedding, and is upset when she overhears Sandy telling Liam that Sandy’s glad Julie’s moving to Brighton.

Emma Waring (Steve’s wife) has been in a road accident. Jas is called in to take a look. It’s awkward between them, but Emma is clueless. Jas then tells Julie that she’s worried that Steve’ll use this as an excuse not to tell Emma that he’s leaving her.

Then Steve and Jas bang into each other and Jas is obviously upset and Steve says that it’s Jasmine that he loves. They kiss up against the elevator until it opens and they both jump back, but there’s no one in it. She gets in and they kiss through the doors as they’re closing. When the doors are closed, Steve sees his son, Robbie who’s seen the whole thing. Robbie is really upset and accuses his father of not caring about his family.

Later, Robbie’s being rude to Jas (who doesnt know that he knows) when Emma goes into respiratory arrest. Tests prove that she has a problem with the muscle in her brain which means constant fatigue, and is very serious. While she’s being taken into theatre, Robbie shouts after Steve and Jas – “I hope sleeping together was worth it” and Tash overhears. Tash talks to Jasmine and Jasmine says how much she loves him, but how she wants to leave Holby. She wants a clean start. She also says that she doesnt want to make four people’s lives misery and doesnt want to split up the family.

Julie’s arrived for her wedding, but Jasmine hasn’t turned up yet. Julie insists that they wait for her. Julie asks her father if he is happy with a small ceremony and he says that he is because she’s happy. Jasmine’s getting ready for the wedding and comes out of the loo but bumps into Steve. She goes back in but he follows her. He says that he’ll wait forever to be with her, he loves her. He says he cares for Emma lots but he’s in love with Jas. Jas says that she cant do this and it’s not fun anymore. She runs off to the wedding, leaving him crying and alone in the ladies toilets.

At the surprise reception organised by Julie’s friends and her father, Steve comes looking for Jas. They go outside and she says ‘I love you so much’ and he says that he loves her too and they go to kiss but she says it’s not enough. She says he needs to be there for Emma and Robbie. He starts to accept that and they just hold their heads together, touching foreheads for ages and they’re crying loads. He kisses her goodbye and walks off in the other direction.

Julie and Martin are obviously very happy and are slowdancing to ‘Love is all around’ by Wet Wet Wet. Jasmine is dancing with Danny, and isn’t as happy. Kath, Danny, Liam and Sandy give Julie her wedding present, a trip to Paris for her and Martin as a honeymoon. Julie is clearly touched and Sandy apologises for what she said earlier, that Julie was harsh but it was for the best and that Sandy’s learnt a lot from her. Julie is flattered and starts to cry.

Julie says that she’s leaving, and Jas shows her the final surprise of the evening – she’s leaving on a romantically lit speed boat. Jas says goodbye and they say how they’ll always be best friends and how they’ll be on the phone all the time. Julie jokes about whether she should tell Martin that she gets seasick. When she gets in the boat, she throws Jas her bouquet and Jas catches it. The boat goes off and Julie and Martin are kissing, and Jas throws the bouquet in the water and starts to cry.

Miranda tells the police that there was a man at Victoria’s flat the morning of her murder. She says that she didn’t know him but Victoria did and they were fighting. She is asked to do an identity parade, and she recognises man 5 – Guy Morton – as the man involved.

– Emma Waring (Tilly Blackwood) who is brought in after a road accident.

– Val Marchant (Frances White) who confesses to Liam that she’s in love with her best friend and is in fact a lesbian. Her best’s friend (played by Gwyneth Powell)’s husband Ken (Kenneth Hadley) is disturbed by this and asks her to stay away 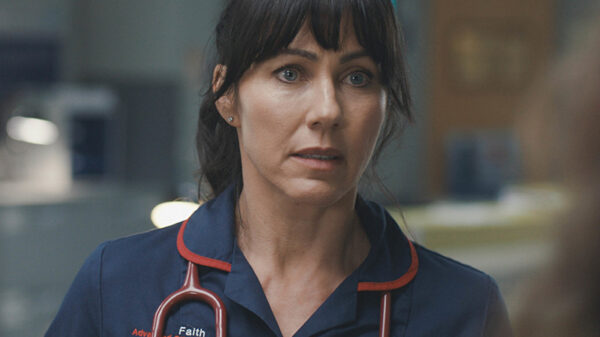 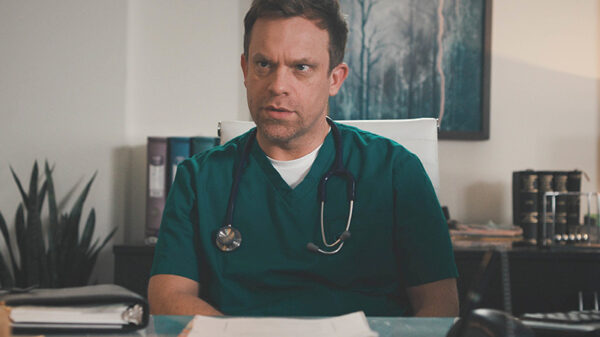