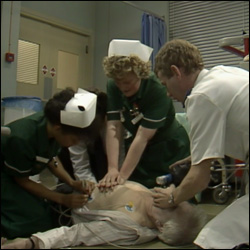 Shirley has problems at home, she gets annoyed with Keith’s permanent happy outlook. Nurse Alison is off sick.

Megan’s school teacher friend, Patty, is brought in with septic shock, from the facial plastic surgery she received after being attacked by pupils.

A young pregnant squatter, Cindy, is in labour. Keith and Shirley deliver her baby girl in the ambulance. Cindy says she doesn’t want her.

Ewart has approached General Manager, Major Franklin, behind Valerie’s back, and wins back the Observation ward. Valerie is annoyed at him for going over her head.

Tony Price, a junkie, comes in, wanting clean needles. David reluctantly gives them and tries to advise him.

And a man comes in with an infected thumb, he is annoyed at the service he is getting. Megan, who has been heading towards crisis, shouts at him and breaks down. Ewart takes her to his office, where she tells him her troubles – Ewart comforts her. He then visits his beloved Observation ward, while there he collapses with a second heart attack. Megan finds him and attempts mouth to mouth. The CRASH team are called up, but all efforts fail, Ewart dies.

* Patty Freeman – school teacher, David diagnoses septicemia from her facial plastic surgery, which she had a week ago, after being thrown out of a window by pupils.

* Cindy – pregnant squatter, delivers a baby girl in the ambulance.

School, teacher walking, whistling. Patty tries to get into car.

Patty : Turn the music off!

* Patty works at Garth Comprehensive School. Her husband is a journalist, Jerry. She had plastic surgery done privately by Dr Beecham.