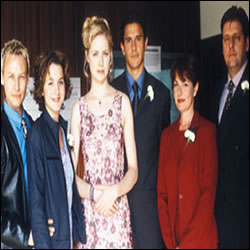 It’s clear that not everyone is happy with Danny’s impending marriage to Marija. His mother, Kath, tells her husband that she thinks Marija’s using him and Danny’s rushing into something he’s not ready for. Marija is still worried that the immigration people will find her and is concerned that Danny’s spending too much money on her. Kath asks Danny if he’s marrying Marija because she’s pregnant, but Danny replies that he feels marija is “the one”. Kath wants him to wait and get married in a church, rather than the registry office.

Kath answers the phone and it’s Alistair, wanting to speak to Chrissie again. They arrange to meet for lunch and Chrissie appears all sweet and smiley on the phone. When Kath questions Chrissie about her destination, Chrissie replies that she’s taking her dog to the vet. Kath doesn’t believe her and asks her what the message is for Alistair if he calls again. Owen watches Chrissie getting into Alistair’s car, and later speaks to Chrissie and accuses her of being up to her old tricks. He says that Janice and Alistair are his friends, and warns Chrissie to stay away but she tells him to get out of her face – there’s nothing going on.

Simon persuades Danny for him to go for a few drinks with him and Danny agrees, on the condition that Liam and Steve can come too. Steve has to pass however, Emma’s ill and he needs to be with her. He wishes Danny good luck. Simon mentions that he has some extra money as he’s been made redundant. Danny confides in Liam that he thinks he’s falling in love with Marija. Kath talks to Father Michael about her concerns, but Father Michael says he should leave them to it and give them a chance.

Sandy and Marija are at home doing some girly bonding, when Kath arrives. Kath shouts at Marija and says that Marija’s using her for money and security, while Sandy sits listening on the stairs. Marija tells Kath that she loves Danny and wouldn’t marry him if she didn’t. Kath goes home and sits thinking, but when Simon arrives home he is aggressive because he is drunk and orders a terrified Kath to go to Danny’s wedding.

Danny is getting cold feet before his wedding, but Liam’s there to offer support – and a strong drink. Danny says that he’s not sure if he can say the wedding vows and not mean them – he thinks he is actually in love with Marija. Marija tells Danny that there’s nothing to stop him finding a girlfriend, the fact that they’re married is irrelevant to future relationships he may want to have.

Danny and Marija get married, and Kath has turned up. They share a quick and awkward kiss after they exchange vows. Marija tells Kath that she’s glad she came, and Danny says the same.

Kath finds out that Simon’s been made redundant (Danny tells her), and tries to comfort him – but he angrily pushes her away. Kath is horrified by his violent behaviour.

Despite being husband and wife, the situation between Danny and Marija is still the same. danny offers her a cup of tea which she refuses and he goes downstairs and spends another lonely night on the couch.

Sheila East (Rachel Fielding) is brought in with suspected appendicitis, but it becomes clear that the pain is caused from a swab left behind after Owen Davies’ team operated on her following an ectopic pregnancy. She told her husband Glen Acfield (Ben Richards) that she had a miscarriage recently, when in fact she’s been infertile for a year and a half.

Ruth Bould (Hollie Chapman), a 13 year old girl with a recurrence of cancer. Her parents Derek (Sam Graham) and Janet (Sandy McDade) are arguing over religion. Janet wants her to be baptised, but her father doesn’t. In the end, Ruth dies and has the last rites said over her – as she, and her mother wished.

Simon: What time does our Danny get off?

Kath: About five I think, why?

Simon: We might go on a couple of pints.

Kath: Aren’t you on night?

Simon: I was but I swapped.

Danny: Can I get you a cup of tea or something?

Danny: I hope it wasn’t too much of an ordeal, today I mean.

Marija: No, it was fine. A bit tiring though.

Danny: Yeah, all that pretending.

[Danny leaves Marija with Luka and goes to his bed]