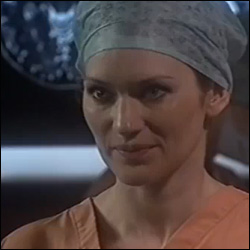 The episode begins with Zubin and Charles Merrick discussing Alex’s forthcoming procedure. Alex is ready for theatre and pacing around his room, telling all his last minute fears to Diane. Zubin and Charles go in to go over the details with Alex one last time, explaining how they’ll insert electro rods into Alex’s brain in an attempt to stop the tremor in his right hand, but that during this, Alex must remain awake so that Zubin can check that his sight and speech aren’t slurred. As a surgeon himself, Alex is more that aware of the risks involved and although Diane assures him that there’s only a minimal risk of anything going wrong, Alex snaps back that the chance of contracting Parkinson’s in your thirties, is just as slim. Zubin reassures Alex that he is surrounded by the best team going and has no need to fear.

Before the operation, Alex confides in Diane that he feels like a ‘condemned man’ and that he spent the night before eating Chinese take away, watching The Godfather and listening to music from his youth, as if it was his last night to live. Diane tries to be of comfort and Alex leans in to kiss her. Diane pulls away, arguing that there will be plenty more women for Alex to kiss after the operation. Alex still insists that Diane accompany him in theatre, although Zubin warns her that with Alex being such a close friend, it will not be easy to watch.

As the procedure gets underway, it’s clear that Diane is not coping well and Alex picks up on her fear. Zubin however, remains confident throughout and constantly tries to put Alex’s mind at rest as Charles inserts the rods into Alex’s brain. Despite a bleed, the results shine through and Alex is able to control the tremor in his right hand, much to his delight.

Back at Holby, Maria Locke is brought in by her brother Mark and is taken into theatre by Ric. When he opens her up, he finds a huge stomach ulcer that is bleeding. He repairs the damage but thinks it was likely to have been caused by stress. On the ward Kath has to deal with the arrival of Maria’s husband, Bernard Locke. He and Mark are at each others throats over the recent break up of Maria and Bernard’s marriage. With a review of the ward expected soon, Kath has been given strict orders to keep things running smoothly and so sends Maria down to AAU, escorted by new nurse Kelly. Ric is preoccupied with the racing results and is annoyed to lose £200 on a horse but soons brightens up after a tip from one of Nic’s patients comes up trumps.

Mark is sure that it’s stress from Bernard that has caused his sister’s condition, and with Bernard’s aggressive attitude and his wife’s reluctance to see him, it does seem a likely cause. Bernard believes there is something else to blame and Maria admits that things have got out of control. In her handbag she shows Bernard a letter saying that the house is going to be reposessed after she ran up high debts on excessive shopping. This stresses her out and so Kelly takes Bernard and Mark outside to calm them down. Maria takes a turn for the worse and Ric is called down to stop the bleeding once again. Maria is fine and Bernard forgives her, promising to work as hard as possible to repay the debts. Mark offers to help out financially too.

On maternity, Sinead, a young pregnant girl has come in after falling down some stairs at the shopping centre, which has led to her bleeding. Rosie and Owen find it strange how she contacts her boss, Roy Gill, especially after he tells them that Sinead is his au pair but later reveals that he and his wife have no children. When his wife, Elaine, turns up, she too seems very concerned for Sinead and Mubbs begins to make jokes about Elaine being his kind of woman! The usually easy going Rosie is not amused as she is waiting for her husband, Sami, to come into the hospital for tests as she wants to try for another baby. When Sami turns up he is embarrassed that Owen and Mubbs know why he is there but gives as good as he gets when Mubbs teases him. His tests come back positive, but this is not such good news for Rosie as it means that the problems conceiving must lie with her.

Sinead begins to open up to Rosie about how she slept with Mr Gill and how she plans to hand sole custody over to him after the birth so that he and his wife can bring the baby up as their own. She tells of her dream to buy a nice house and decorate it the way she wants to with the money that the Gills are going to give her. Rosie warns that giving up a baby is not so straight forward and that it will be very traumatic for her. Sinead haemorrhages and Owen has to carry out a caesarean. He delivers a baby boy, that Elaine has already named Alistair, who is very ill but is expected to be fine after spending a few weeks on the special care baby unit. Sinead does begin to display emotion when she learns of the baby being ill, and gives the baby a middle name, Damian, after her boyfriend.

Throughout his hectic day at work, Owen is being constantly bombarded by Tricia, telling him to hurry up and sign the divorce papers, as it is in Chrissie’s best interest. Chrissie seems more keen to get rid of her mother and is not happy to hear that Tricia is applying for a secretarial job at Holby. Owen bumps into Tricia in the canteen and they arrange to meet later to discuss the divorce. Tricia turns up just as Owen is comforting Rosie about Sami’s test results, and Tricia jumps to conclusions. Owen tries his hardest to convince Tricia that divorce is not the best option for her daughter as he loves her so much and doesn’t believe that there is anyone else like her. Tricia, clearly impressed by Owen’s heartfelt declaration, kisses her son-in-law. Owen responds briefly but soon pulls away saying that it’s wrong. A hurt looking Tricia leaves his office.

Sinead Quinlan, a young woman who gives birth to a little boy

[Owen and Tricia are kissing in his office]

Owen: What are we doing?

[They kiss some more]

In this article:HC Series 5, Rob Fraser

S5 E31 (6 May 03) : Going It Alone by Johanne McAndrew Episode Summary Lisa begins her shift in AAU. She talks to Jess about...