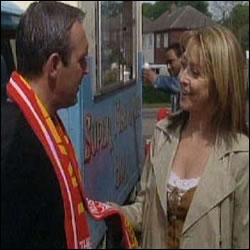 Ric addresses all of the staff on Keller about the review that day. He speaks to Kath about the patients in the day care unit. Kath tells him that consultants are only being bleeped once by the nurses. Kath speaks to Chrissie – it seems that the nurses are going against the consultants after the comment Diane made about the nurses. Diane snaps at Kelly for her comments during the ward meeting. Ric speaks to Helen Grant about the review. He then see’s a patient in AAU – Patrick Sanders who is transferred to Keller. As Patrick goes to Keller Kath goes to AAU. She speaks to Lisa and although they seem to be getting on well Kath’s comments on Patrick and his sister bring up Terry and there becomes a tension between the two. Kath asks Lisa about whether she can find out who has taken over union rep leader after Steve as the comment Diane made has left tension between Diane and Kath’s nurses. Diane speaks to Kath about the way Kelly spoke to her when she tried to help a patient. As Kath goes to walk onto the ward Ric stops her and asks her to explain what’s going on. Kath tries to walk away but Ric demands the truth – She tells him there’s tension after Diane’s comments. Ric talks to Zubin about the problem with the nurses, Ric says that it doesn’t help the fact that they are under paid and work long hours. Diane and Ric argue over what Diane said about the nurses. Zubin and the operating team all here as this argument takes place as Ric and Diane scurb up for Patrick Sanders’ operation. Lisa comes up from AAU as Kath asks after Ric – after the operation. Lisa and Ric discuss about patients so that Diane can hear them. Diane and Zubin walk off and talk. Diane says she won’t apologise for what she said. Kath is called for by the review team and Helen Grant tells her to let her know how it goes. Kath later asks Ric if he’s spoken to Diane, Ric suggests to Diane that they both go to the meeting for the nurses. Kelly tells Lisa to have a go at being the new union rep leader. Diane gives Ric a letter of apology although she resents apologising and she makes sure Ric knows this. Lisa catches up with Kath and asks her if she’s going to the nurses meeting – which she is. Kath asks who the new union rep leader is and Lisa admits it’s her. Helen suggests that Ric takes the review team to dinner. Ric tells them some other time and speaks to Helen privately. Ric leaves and goes into the staff room for the nurses meeting.

Nic and Sandy are talking and Chrissie interrupts them. They admit Alan Knox with chest pains. Ed plans to operate but Alan has a high temperature. He’s tested for tropical diseases as he’s just come back from South Africa. Alan has Malaria and Zubin tries everything to get his temperature down. Nic asks Kelly to sign his form for his NVQ, she snaps and tells him to get Kath to do it since he was doing what she wanted to begin with. Tricia goes up to see Chrissie and hands her an envelope. Chrissie opens it to reveal her divorce papers. Nic stands up to Kelly when Sandy tells him not to let her push him around. Zubin hands Ric a letter of apology for the conversation he had with Diane which made all the problems with the nurses. Zubin asks Ric to do a procedure on Alan that Ric has never heard of – Helen tells him it’s not wise to do he procedure since his wards under review but Ric goes ahead with it anyway. Ric performs what Zubin asked and it seems to work but a little while later Alan suffers a major heartattack and they can’t resuscitate him. Chrissie and Zubin break the news to his wife. Chrissie decides to leave early and tells Sandy to contact Kath if she has any problems. Sandy moans to Nic about Chrissie leaving and Nic cancels their date since he wants to make it up to Kelly for shouting at her.

Owen works half the day and goes to the football with Tricia. Both Owen and Chrissie got their divorce papers through. The patient on maternity – Dee, is diabetic and becomes hyperglacemic. Mubbs and Rosie talk about his birthday – she gives him a card and he asks if she’ll buy him a drink. She seems worried for the moments they shared the week before. Mubbs goes to lunch with his parents and cousin. His parents discuss the fact he’s thrity and not married. Mubbs says he prefers to be alone. Mubbs heads back to work after a disagreement with his cousin and he arrives in time as Dee goes into labour. Owen and Tricia meet at the football match. The two of them go back to her flat where they spend sometime together and sleep together. Chrissie comes home as the two of them are together. Tricia goes out to sit with Chrissie who says she regrets the divorce. She goes to get clean towels from Tricia’s room who hopes that Owen has hidden somewhere. Owen hides on the balcony with just a scarf around him whilst Tricia searches her bedroom for him since Chrissie’s having a shower. Rosie and Mubbs talk and she offers to buy him a drink and he jokes about a kiss except Rosie didn’t find it funny.

Alan Knox – A patient admitted to Darwin with chest pains, he has malaria and later dies of a major heartattack.

Patrick Sanders – A patient in AAU who has damaged his arm in an accident, Ric operates although it doesn’t look to good and the patient is transferred to Keller.

Dee Parr – A diabetic patient on maternity who becomes hyperglacemic and later goes into labour – she has a girl.

[Ric is talking to the staff]

Ric: I’d just like to say a few words about my appointment as Clinical Director. I know that things have been tough for all of you, preparing for the commission of health improvement review. And I’m sure you all understand how important this assessment is for us. We all want Holby to hold on to its three star rating.

Helen: Look. I know today has been very difficult for you Ric. But it really didn’t look good you performing that unorthodox operation on the patient who died.

Ric: From a heart attack. The operation was a success.

Helen: Well, here’s your chance to make it up.

Ric: I’m sorry Helen, but there’s a nurses meeting I really have to attend.

Helen: As head of Keller ward perhaps you do, as a clinical I need you with me at that dinner. I really think in this new role, Ric, you’ll have to start thinking about shifting your loyalties, you know.

[Ric walks away, into the staff room, where the nurses meeting is.]

In this article:HC Series 5, Paul Coates 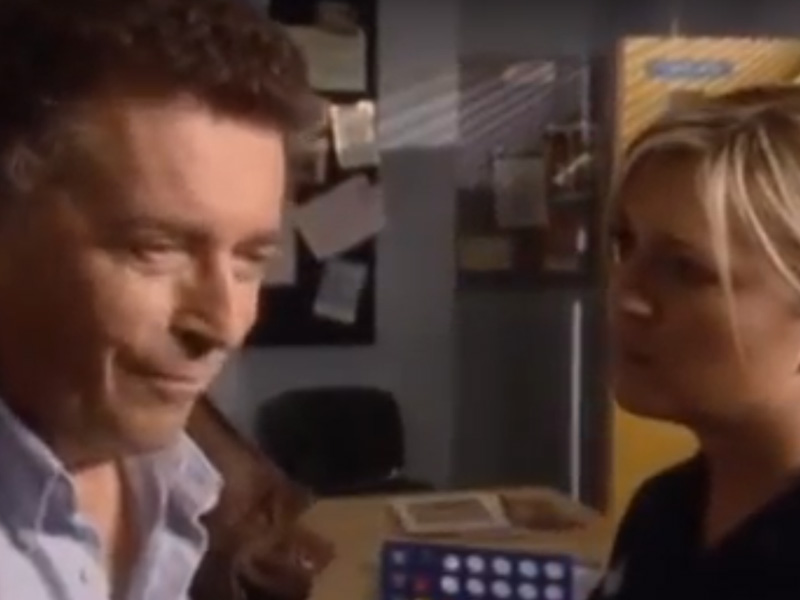 Mark goes to see Chrissie who tells her about Tricia’s illness. When Tricia bumps into him, she is furious at seeing him. Owen and... 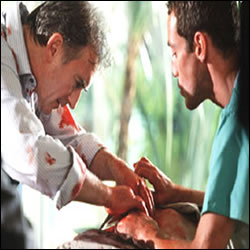