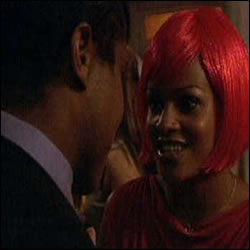 When his interview is published, Ric feels that the Press has made a fool of him. The article makes it seem like he admits that the death was the hospital’s fault, even though he only has said that accidents might happen and not necessarily be anyone’s fault. Later he asks Zubin to shoot him if Zubin ever sees him talking to a journalist again. Later in the day, he is humiliated further when the TV he bought for Jess’s 21st birthday is repossessed during her party because his £3,000 cheque has bounced and the auction rules say that everything has to be paid the day after. When he finally admits that he is having financial problems, Jess is upset that he has not been honest with her. Ric tries to put it all behind him by getting stoned and kissing Kelly. He is about to tell Kelly that they should stop, because he is drunk and stoned, when he is distracted by an urgent call from Zubin, who has some serious news from the coroner. He quickly leaves the party, making Jess even more disappointed and goes into work. He quickly warns Kath that there is trouble on the way, before Ric and Zubin together with the coroner explain to Helen Grant that Beth Oliver died because someone deliberately pumped her full of insulin and that it could not have been a mistake.

Sian Reeves (Cutting It) guest stars as Rachel Harvey, a pregnant woman estranged from her father whom she blames for her last child’s death. She comes in for a pregnancy test and when Owen finds out she is about eight weeks pregnant, she wants to have an abortion. She explains that her previous baby had a serious muscle disorder and that she does not want to risk it and get another ill child. Meanwhile, her father, Billy Harvey is taken into hospital and he is in serious need of a heart bypass. He manages to catch a glimpse of Rachel, who is on the way to maternity. Chrissie tries to talk Rachel into meeting her father before the surgery, but she does not want to, because she is blaming him of her last child’s death. Owen tries to get her to leave the past behind, especially after her father runs down to maternity to try to talk to her, but she is not ready to forgive him, even though she seems to slowly start to realise that it was no one’s fault that the child died. In the end, after he has seriously deteriorated, she talks to him while he is being taken to surgery. His heart proves to be too weak and even though Ed tries and tries, they cannot get his heart to start beating again after taking him off bypass.

Dean Shepherd comes into hospital with stomach pains. He has got a history of cancer and it now seems to have returned, exactly as he has feared. His wife, Karen, is shocked to find out that he has had cancer in the past – apparently he has never told her about it. At first Dean does not want surgery, even though it is life essential that he has it, explaining that if he cannot be with Karen he does not want to fight. Karen promises to be there for him when he wakes up and reluctantly he agrees. Ric and Diane manage to both save the small bowel as well as remove the cancer.

There is a card from Danny and Sandy. Kath suggests that they might be more than friends and Chrissie says that Sandy seems to have learnt from her mistakes and now she has got both money as well as a man.

Meanwhile, despite the fact that Chrissie and Owen’s Decree Nisi has finally arrived, they choose to forget the past, and get reacquainted under the coats at the party, inspired by the fact that for once they are together and both are single. Tricia, however, is not happy and spends all day worrying about Chrissie finding out about her and Owen’s holiday. Worried that Chrissie and Owen might get back together, she tells Chrissie off for starting to regret the divorce and says that she did not bring Chrissie up to be that weak, which leaves Chrissie surprised. Jess, too, is on a mission to snog and has invited lots of guys to the birthday party – and ends up with Nic at the end of the night.

Dean Shepherd, history of cancer and now it hass returned, making a hole in the bowel.

Billy Harvey, Rachel’s father, has a heart bypass, but does not survive the operation

Coroner: She was diagnosed manic depressive.

Coroner: So suicide is a possibility.

Zubin: Except for her litium.

Ric: I don’t think she had any with her. But even if she had taken more than the prescribed dose after I’d left, I don’t see how that could have lead to a cardiac arrest.

Coroner: The C-peptide ratio was 1.5.

Zubin: Beth Oliver died, because her body was pumped full of insulin.

Ric: It must have gone into her IV. It couldn’t have been a mistake.

Coroner: There were no other needle marks.

Zubin: And there was no reason for insulin to be anywhere near her.

Ric: Someone must have done it deliberately.