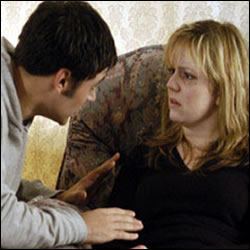 In an explosive episode of Holby City, Zubin finds Kath bleeding and near death and snaps into work mode to save her life.

When Nina awakes and starts talking, Nic realises Kelly has been telling the truth. He rushes to Nina’s flat to find Kelly holed up in the living room with the gas on after ransacking the place. Just as Nic thinks he’s got through to her, the gas ignites and he takes the full brunt of the explosion.

Adrian Summers, a charismatic 50-year-old arrives – his younger girlfriend has complications with an unexpected pregnancy. He is not keen to start another family, a fact that he and his girlfriend have not discussed until now.

Tricia returns to complete a nurse’s refresher course and is stuck with Chrissie. Her defiant and unapologetic manner causes friction.

Tom thinks Ric and Zubin are ganging up on him when he flexes his muscles and is put in his place by the big guns. He is surprised to find Ed no longer feels part of his team.

Mubbs is on top of the world and news spreads fast, but Rosie is not overjoyed to be the subject of hospital gossip.

Episode Summary Tricia is over the moon after her night with Carlos but worries that he does not feel the same way about her....