‘We’ll Meet Again’ : Ric assumes that something will happen with Connie after sleeping with her last week. She says that they may have a repeat performance – if she has the time. Ric thinks he has met his match but Zubin warns she is out of his league and that Chrissie is far too powerful. Will finds it difficult working under Connie’s direction. She puts him in his place when she does not agree with a judgement call that he makes. She sweeps his protests aside, saying she understands his need to assert himself but not at the expense of her patient.

Meanwhile, Diane’s pregnant sister, Joanna, is admitted to the ward after being involved in a car crash. She is angry that Joanna was not wearing a seat belt and sees this lack of responsibility as indicative of someone who is unprepared for motherhood. She also says that she was worried because Joanna had been staying at her place after being dumped by her boyfriend again, but had left in the middle of the night to meet the boyfriend, without saying Diane a word where she had disappeared. They do not seem to get on very well and Joanna calls Diane an “uptight old cow” in front of Owen. Suddenly Joanna’s condition worsens and needs surgery to remove a blood cloth and Diane urges Owen and Connie to do anything for her sister, even at the expense of the baby. After the surgery she is moved to ITU with respiratory distress, leaving Diane devastated. Owen tries to offer her help and suggest she should get some rest, but she tell him to leave her alone.

Stuart Nobel, the driver of the minicab Joanna was in, is also in hospital after having had a close encounter with the dashboard and some bowel injuries. Connie wants to send some of his blood to an alchohol test, but Zubin is not happy about Connie’s idea to test him without him getting to know about it and being told about the involvement of the Police. Connie insists and tells Zubin that she would have expect him to have a different view on things, seeing as his wife was killed by a drink driver.

Donna arrives late again, after having been out all night. She gives her clothes to Mickie to put away and Mickie finds a wrap of speed in the pocket and drops it in front of Owen. He is furious but says he will not report her – this time. Mickie shouts at Donna, who is more concerned with having the speed returned. Mickie also has to face a troublesome patient, when Claire Shelly is in hospital and gives birth to a boy. Claire’s partner seems to think she knows everything better than Mickie and is not sure if Mickie is qualified enough, but Mickie manages to handle it.

Connie makes the suggestion that Donna should have a bit more responsibility and lets her look after Ron Archer, an old ex-soldier who is suffering from stomach pains and, even though she at first takes him for being senile, he manages to impress Donna with her life experience. When Mr Archer takes a turn for the worse, Will and Ric rush him into theatre without having taken proper x-rays of him. There they realise that he has an aortic aneurysm they need Connie’s help for. She is not pleased at them having rushed him straight into theatre, saying that they could have shortened the time under anaesthetics, had they known what to expect. After the surgery Will talks to Ron Archer about being in the army and makes Ron sound like a hero for being in the Second World War, but reluctantly Ron explains how the war is not as great as people make it sound and how he was no hero, instead his war was over in a day and he spent the rest of the war in a POW camp, having surrendered after his friend died in his arms.

Written by by Paul Coates

Diane: Hey! What are you doing here?

Owen: To make up for not seeing each other last night

[He hands her the flower and Diane laughs]

Diane: Oh Owen, you really didn’t have to.

Owen: Well, we’ve both been busy this week and I missed you, so…

Diane: We had a really nice time. It was fun, but I need to be with my sister.

Owen: Diane, don’t do this.

Diane: I don’t want you here. Would you just go.

Sunetra Sarker [Brookside, No Angels] makes an appearance as the partner of a woman in labour.

In this article:HC Series 6, Paul Coates

Summary This is the story of the birth of a character from script to screen. For the producers, it’s a labour of love, for... 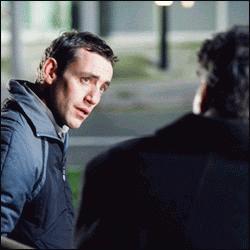