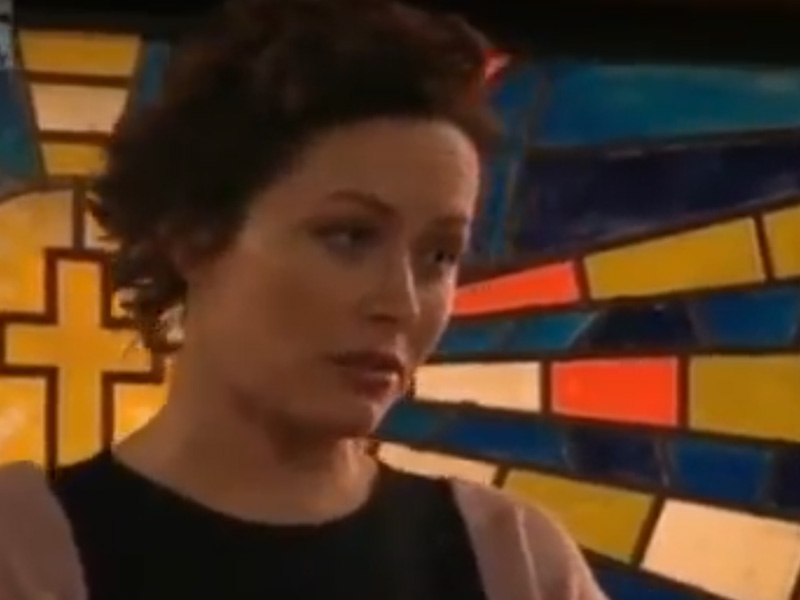 It is the day of Will’s memorial service. Holby Chief Executive, Peter, tells Connie that it is important that there is no negative publicity surrounding Will’s death. Connie gives a reading about Will at the service. Will’s grieving wife Susan tells Connie to shut up and tell the truth. Susan claims that Connie made Will’s life a misery by bullying and harassing him. She also adds that his death is Connie’s fault – if she had not put his picture in the paper Jodie would never have tracked him down. She finishes her outburst by saying Will’s blood is on Connie’s hands. After the service Mickie speaks to Susan, saying that she blames herself for Will’s death, Susan reassures her that it was nothing to do with her.

Later, Peter and Zubin pay Connie a visit in her office. Peter informs her that Susan is making an official complaint about her bullying to the board. Connie denies she ever harassed Will but Zubin disagrees and starts to list examples of her behaviour. Connie retaliates, saying Susan is simply a grieving widow looking for someone to blame and that the board will back her up. Peter replies that the board has reservations about her opening up ITU prematurely and that they should reach a compromise – if she gives a quiet resignation he will give her a good settlement package, Connie is shocked.

Owen and Diane are back from their honeymoon. Chrissie tells Tricia that she thinks Owen still has feelings for her. When Tricia sees Owen she warns him to stay away from Chrissie. Owen apologises to Chrissie, he says he was drunk the night they slept together and that he loves Diane. Chrissie suggests that Diane should be told about her husband’s infidelity. Later, Owen sees Diane and Chrissie speaking at the service and later asks Chrissie if she told Diane. Chrissie says she has finally realised how self-centered he is and no, she will not tell Diane about their night of passion.

Zubin tries to talk to Jess about Sean. She tells him she wants a man who loves her – not a financial arrangement. Jess is disappointed when Zubin says he hopes everything works out for them. Sean talks to Jess about wedding plans. Jess reminds him that she has not said yes yet and she wants to take things slowly. Sean takes this to mean that the way he proposed was the problem so he decides to ask for Ric’s blessing. When he is given it an overjoyed Sean tells Jess the news. He takes out a ring and proposes but they are interrupted by a patient. Later, Sean badgers Jess for an answer he warns her that he will not wait around forever.

Teenager Hayley has a heart problem and Connie tells her parents she needs an operation to increase her life expectancy, however the operation success rate is 50%. They decide to go through with it, and at first it looks as if she is going to make it, but she then suffers a cerebral haemorrhage and dies.

Kelly Wilson is 34 weeks pregnant and has a condition which could lead to heart failure. She hasn’t told her husband as she fears he wouldn’t have let them have the baby. As her condition worsens, Owen decides to give her an emergency caesarean where they deliver a baby boy.

Lingerie specialist Lionel is brought into the wards after an RTA. He has liver damage and needs an operation, but Lionel is annoyed that this means he’ll miss an important meeting. He demands his long suffering PA, Selina, attend the meeting in his place but she doesn’t go when her knee injury is recognised by Jess. Selina is offered a new job by another business, however she decides to stay put.

* Kelly Wilson – pregnant with condition that could give her heart failure. Gives birth to a baby boy.

* According to Lionel, Jess’ chest measurment is 34D.

* ‘How would you feel if your crazy lesbo lover topped one of the surgeons?’ – Mubbs