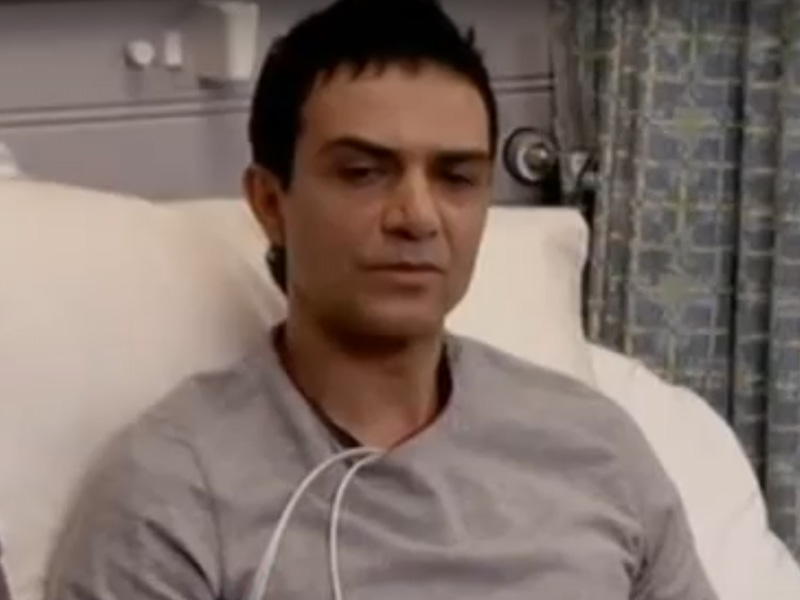 ‘If It Ain’t Broke’ : Connie’s SuperDarwin ward opens, but some of the staff aren’t pleased.

Tricia comes in for her breast operation, she is flustered and cannot remember where she is supposed to be. Mark comforts her and goes to find out for her but has to break disappointing news – her operation has been cancelled and will be put off to an indefinite date. Tricia is devastated. Carlos hears of this and tells Tricia he has got her a bed at the Private Haddlington hospital. Tricia says she cannot afford this but Carlos tells her he has called in a favour and is offering his services for free. Tricia says she cannot accept this. Tricia tells Mark about Carlos’s offer and Mark talks her into getting the operation done. At the Haddlington, Carlos prepares to examine Tricia. She is emotional and asks if he can bear to look at her scar as she cannot look at it herself. Carlos reassures and comforts her. As Tricia is on the operating table Carlos tells Tricia he loves her, just then Mark arrives with a bunch of flowers, unaware he has spoilt Carlos’s moment. After the operation Mark waits to see Tricia but Carlos convinces him to go home. Back at work Chrissie is surprised to see Mark and tells him he should fight for Tricia, Mark realises she is right. When she wakes up Carlos tells Tricia he wants her back, but she worries that if the cancer came back he would leave her again but he begs for another chance.

Mubbs is being treated after his heart attack last week. Lola is concerned about him but Mubbs is complacent about his health. He persuades Matt and Dean to smuggle him a bacon sandwich. Lola catches him and is seething. She tells him he is lucky, he does not need an operation but will need to take medication and make lifestyle changes. In denial, Mubbs decides to get changed and go out that night. Lola finds him collapsed on the hospital stairs. Later, Lola tells him he had suffered an anxiety attack. Mubbs is shocked because he thought he was actually dying. Lola warns him that he could very well die if he does not look after himself.

Patient, Rob, comes in with his wife. As he awaits his operation for a new heart, he is put in a ward next to Mubbs. Rob and his wife have done lots of charity work, and he hopes to continue once he has had his operation, however this conflicts with his wife who wants their life back to normal and her wish to start a family.

Heather Walsh is brought in with chest pains. She has a scar on a chest from a previous car accident which killed her husband. Since the accident, she has become an alcoholic leaving her mother to look after her son. They try to persuade her that she needs to get better for the sake of him.

Connie does both Rob and Heather’s operations in quick succession, leaving not much room for error. Zubin is not pleased with her behaviour, though she succeeds in completing both operations successfully.

Written by by Joe Ainsworth

* Matt and Dean are aggrevating Mubbs. ‘Just a small prick’ Matt says as he gives him an injection. ‘Or two!’ Mubbs adds.

* Disappointed to learn of her cancelled operation, Tricia says ‘This operation was meant to be day one of the rest of my life.’

* Mark failed to hide his contempt for Carlos, ‘Zorro to the rescue’ he said of him sarcastically, and later on says ‘He really fancies himself as a superhero!’