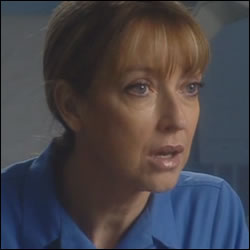 ‘Abracadabra’ : Mickie realises that Nick was the one who cut Helena Bosman’s urethra. She decides to tell Connie and Diane is overjoyed, thinking she will be exonerated. However, when Connie says there is no official evidence Diane walks out, feeling frustrated. She decides to take extended leave from the hospital. Nick tells Mickie that he knows she is the whistle blower, informing her that she has made a bad enemy.

Tricia and Mark are excited that they’re back together but Tricia wants to keep it quiet. Diane looks into the possibility of bringing Tricia’s breast operation forward.

Tricia is helping treat young Mia Fairbrother who has a heart condition. Her grandfather, Mike, who has looked after her since Mia’s mother died, is told she will need a transplant. Mike dumps his girlfriend when she suggests he may be to old to give her the best care and should think of adoption. During a scan, Tricia goes in with Mia to support her, however Elliot notices a mass on Tricia’s liver and gets Diane to break the bad news. Later Tricia attempts to tell Mark but stops herself when he is excited about taking her out for the night.

Meanwhile, Diane is surprised to see Abra is back. He will be supervising her while Ric is away. He also admits that he’s not going back to Africa and intends to find a job in England. Abra treats elderly patient, Grace, who has a sliced finger and also abdomen pains. Abra gets a leech from Reg to treat her finger and diagnoses that she has gallstones. However she says she won’t come back to hospital for the operation – Abra breaks rules to operate that day, getting Reg and Donna to assist. But he jeopardises his job chances when he is caught out.

Mickie treats hernia patient, Dave, who Donna has warned is an attention seeker. However when she spots blood in his urine, she realises he does have further complications.

* Abra reveals he left Africa because of ‘girl trouble’ as he was dating the chief of Police’s daughter.

* Tricia is devestated when she learns about mass on liver, ‘I’ve made stupid plans, for my stupid bloody future,’ she tells Diane.

* ‘I’m sorry,’ Nick tells Diane when hearing she’s taking leave following their incident. ‘No you’re not!’ she replies. ‘No I don’t suppose I am,’ he says smirking.

A conflicted Hanssen worries that the upcoming court case will cause more harm than good. Does his abuser still hold power over him? Ange’s...