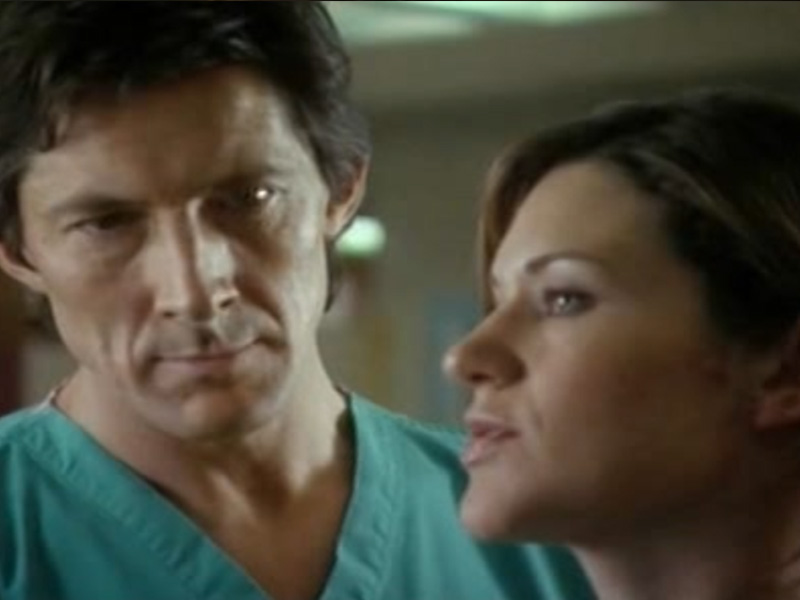 Joseph is not happy with Jac’s over-friendly approach to Lord Byrne. Faye witnesses Jac’s game and Joseph’s discomfort and decides to do something about it. Faye mentions to Sam that Joseph is worried about his ‘girlfriend’ muscling in on his family. Sam remarks Faye’s big on the advice but not great on action.

Diane witnesses a moment between Lord Byrne and Jac. She correctly perceives this as Jac working Lord Byrne – she thinks she must get Dan more on side. During theatre, Dan decides to wind Diane up about Ric, leading her moan about her previous mentor – unbeknown to her Ric is back in Holby and turns up in theatre just as she speaks negatively of him.

Later, Diane speaks to Ric and apologises to him but she faces more surprises when he introduces her to his new fiancee Thandie. Meanwhile Sutherland speaks to both Dan and Ric individually to ask them to watch eachother.

Maddy rocks up to work with a heavy hangover following her night with Sam. Lola gives her a hard time and she smells alcohol on her breath. Lola insists she gets no special treatment because she’s a friend of Dan’s. Maddy sets out to prove that she is the best woman for the job.

One of Maddy’s patients is Rita Innis, who arranges Swingers parties. Lola wants to discharge her however Maddy quickly recognises she has an aortic aneurism.

Terminal teenage patient Ali with a heart condition comes into Holby. Jac pushes an ‘Oslo heart’ procedure infront of Lord Byrne, but Joseph is not keen. Ali confides in Faye that she would rather not have the operation but is trying to please her father. Before the operation, Ali is allowed to be wheeled outside to watch the consolations, there she pulls out her leads and drip and staff are unable to save her.

A man, Guy, is brought in for a gall bladder removal. During the operation a lump is found. Meanwhile he faces stress when his pregnant girlfriend learns of his affair with his ex-wife.

Matt is distracted at work due to mobile calls with girlfriend Nikki.

During her shift, HR have been calling the hospital in search of a Faye Wilson. Faye asks Mark to help avoid them however after work the police come looking for her. They want to question her regarding the death of her husband James.

* ‘You’re not the first to be seduced by him’ Lola remarks to Maddy. She retorts ‘I seduced him!’

* Diane tells Dan that he sometimes makes her feel like a naughty school girl and slips out ‘I quite like it actually!’

* Dan teases Diane ‘The big difference between you and Jac is I’d sleep with you – I wouldn’t sleep with Jac!’

* Thandie introduces herself as ‘Ricky’s fiancee’.