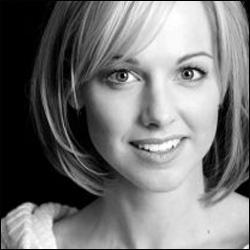 RELATIONSHIPS : Divorced (2009) from Ben O’Sullivan, in computer sales, who she married in June 2003.

ON HER CHARACTER BEX : ‘She’s not afraid to talk back to her superiors, and that makes her unpopular. In fact, she doesn’t get on with many of the staff because she’s a bit short, bitchy and a gossip. To be honest I’m terrified of how people are going to react on the street.’

ON SIMILARITIES WITH BEX : ‘Erm…. her quick-wittedness (is that a word?!) is very like me, but I’m glad to say I’m more thoughtful than her and I certainly don’t get pleasure from rubbing people up the wrong way like Bex does.’

ON HER LOVE SCENES WITH DILLON : ‘We were in the shower together and oh my goodness me, he was wearing nothing at all! He did have a special thong but it looked ridiculous, so in bed he used the telephone to cover his modesty!’

ON WORKING WITH CASUALTY CAST : ‘We have great parties especially at Martina Laird’s house. She’s an amazing cook and I’m addicted to her famous special bread and chicken. We have trips which are usually hilarious – pure carnage!’

ON WORKING ON CASUALTY : ‘It’s a fab show to be part of in so many ways it’s difficult to pinpoint what’s best about it. It’s a hugely successful show, and had been for many, many years, so I guess it’s the pride I feel knowing I’m appearing regularly in such a well-loved prime-time drama.’

ON BEING SQUEAMISH : ‘I used to love watching programmes showing operations on TV when I was younger. I found them fascinating. But now, strangely enough, since working on Casualty, I have become much more squeamish! You’d think it would have the opposite effect, but being so close to so many realistic looking gammy wounds has turned me into a wimp!!’

ON RAPE STORYLINE : ‘It sounds dreadful, but I was thrilled to do something so harrowing – for the past two years, Bex has been the comic relief, so I wanted to get stuck into some gritty stuff’.

IF SHE COULD PLAY ANY CHARACTER BESIDES BEX : ‘Probably Nikki as she can have a bit of an attitude, like Bex, which is always good fun to play. Plus she gets some great storylines.’

ON MODELLING : ‘I’d never done modelling before and they wanted me to look a bit cheeky. I can pout but I can’t do the ‘come and get me look’. But it’s always a big surprise when you see all the pictures. On the way home I was still covered in the oil they’d sprayed on me. It was in my hair and I had a great big spot coming on my chin but these Polaroids were in my bag. I was sitting on the Tube and really wanted to wave them at everyone and say ‘Look I can look amazing!’

ON FAN MAIL : ‘The funniest was from a group of four lads who sent a questionnaire. It had questions such as ‘When was the last time someone smacked you on the bottom’ And did you a) smile back b) chide them…’ It was hilarious.’

NICKNAME : At school she was called ‘Uggers Manners’ – ‘I was tall, and very unattractive, teeth all over the place. I was the one boys didn’t want to play kiss chase with.’