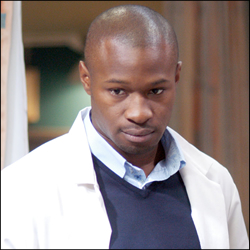 Strong, masculine, cocky and laid back, football loving Sean Thompson’s a popular and excellent SHO, with a bright future ahead of him. Sean doesn’t have a minute to waste and incredibly outspoken, covering what would be rudeness in others with wit and charm. He is born of Afro Caribbean, immigrant, parents but was fostered out aged three.

Never comfortable in foster care, Sean had a difficult relationship with many of his foster parents, going off the rails as puberty hit. Naturally academically gifted, Sean often had to move school. He found many of the comprehensives he attended didn’t challenge him academically, so soon became bored, finding amusement with the wrong crowd. Incensed at his rebellious behaviour, he rowed with his foster father, and, in a flash of anger, assaulted him. Aged 14, his foster father vowed that he was washing his hands of Sean and, had it not been for the intervention of PC Matthew Burchill, the officer assigned to his case, Sean would easily have received a custodial sentence.

Seeing something in Sean, Matthew and his wife, Liz took Sean in. Sean not only had to deal with being the son of a policeman, but also the fact that his foster parents are white – a burden he carried with his usual wisecracking and sharp intellect. Sean had a turbulent background until Matt showed him what being a good father was all about. For the first time, Sean had people he could comfortably call Mum and Dad, but he still yearns to find out more about his past.

Despite a turbulent start to his relationship with Matthew and Liz, Sean found the necessary drive and encouragement to work hard enough to get through his exams. Sean being Sean, he set his sights high and decided he was going to be a doctor.

Socially, Sean can be the life and soul, but it’s largely a front. He makes friends easily, but very few people get to see below the surface. Sean won’t give information about his private life away unless he trusts completely – a legacy of his insecure past. He’s comfortable with his own company, often enjoying a solo cycle ride, or practicing his guitar in a quiet corner playing along to his favourite Jazz and R&B, but once his trust has been gained, he’s fiercely loyal.

Matthew and Liz worried about what Sean was going to do with his life, despite his undoubted intelligence. A cruel twist of fate gave Sean the direction he had been lacking. Aged just 16, Sean found himself facing up to the death of Liz through cancer. Grief stricken at the loss of the only woman he had ever felt comfortable enough to call ‘mum’, he turned his attention to medicine. Studying hard to achieve the grades, Sean excelled and was offered a place at UCH in London.

Because of his history, Sean has already decided that he wants to focus on oncology. When he reaches Registrar level that is where he will specialise. Sean has recently transferred to Holby keen to practice there due to its excellence in cancer treatment. He’s entered a rotation in the anaesthetic’s department and has his career plan carefully mapped out; his next move being a rotation in the general surgical wards. There he will come under the wing of a new mentor – Ric. Ric, for all his flaws, is the kind of doctor Sean aspires to be and Ric recognises in him the son he wishes Leo had been.