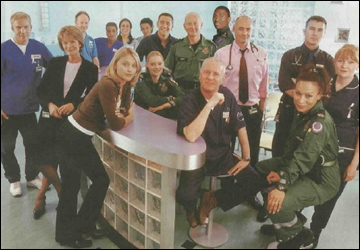 Hopes of a relationship between Holly and Patrick had faded when Series 16 returned with many characters absent and some unexplained. An axing cull caused controversy with fans. Holly had left for Germany, while Melanie, Barney, and Dan were all unaccounted for. The shake-up was defended by new producer Mervyn Watson, ‘We’ve done everything possible with those characters and I wanted to move on. And let’s face it, in real A&E departments, the staff turnover is far greater than it is in Casualty.’

Series 16 was extended to 40 episodes. Series Producer Mal Young explained the increase, ‘Saturday night is Casualty night. We were receiving complaints when it was off air, so we’ve decided to give viewers more of what they want.’

Watson was keen to spice up the show with pacey storylines and fresh faces. It admittedly worked, mainly with the arrival of sexy Australian doctor Lara Stone. Her ambitious streak led her to an army of fans who either admired her or fancied her. Other popular newcomers included good looking nurse Dillon Cahill, technician Nikki Marshall and paramedic Comfort Jones. Love interests were also brought in; Charlie found love with Manager Jan Goddard and Patrick had a brief fling with Policewoman Rachel James before ending up getting cosy with Lara.

Character storylines were at it’s peak; Chloe left to go on the run with her dodgy boyfriend, Max quit after being made a scapegoat in the press after a Norwalk virus erupts, Jack suffered testicular cancer, Josh and Colette married but it was Patrick’s love life and eventual exit which caused the most drama. After a motorway accident, Patrick proposes to Lara, but as she pops to the loo, she returns to find Patrick slumped dead from his earlier injuries.

In his shoes came arrogant Simon Kaminski, claiming himself to be ‘the new Spiller’ didn’t go down to well with fans and he was clearly at first a love-to-hate figure. Established actors were also making a comeback to prime time dramas; the BBC managed to get their hands on Falcon Crest star Simon MacCorkindale to star as the new Consultant.

Casualty again ended on a dramatic high, when Nikki Marshall is stabbed. Fighting for her life in CRASH; her boyfriend Jack Vincent proposed to her. But would she survive?

In this article:Cas Series 16, Casualty Series