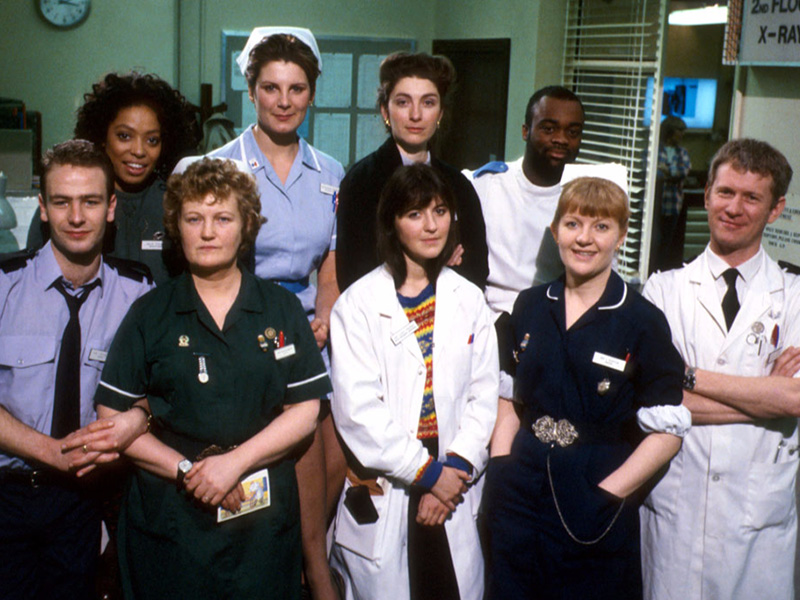 After three years most viewers knew that the Holby A&E team did a hard, sometimes heartbreaking job in a far from perfect National Health Service. What they hadn’t learned to-do was to play the Casualty game; spot the victim, guess the crisis. For this show had to develop its potential to tease and thrill without losing its basic truthfulness.

It was a trick pulled off by Peter Norris, when he took over as producer in 1989. His arrival in Bristol had surprised no-one more than himself as Geraint Morris left to work on The Bill. ‘I was on my way to Bristol like a shot,’ reminisced Norris.

There were no scripts and no cast change at that stage. But Jonathan Powell had decided to experiment. Casualty continued to be shown on Fridays but at a later time, 9.30pm, after the so-called ‘watershed’. ‘The show was highly successful and I certainly wasn’t going to change it out of all recognition,’ says Norris. ‘I enjoyed the exotica of medicine very much, but I guessed the audience could take it a bit tougher.’ For this he hired writers with bees in their bonnets about special issues. ‘We allowed them freedom with the writing to tackle strong stories head on. The first three series had looked at the politics of the NHS. I cut back on that so that I’d have the chance to go in harder on individual social issues, terrorism, football hooliganism, charity fundraising, racial violence, the lack of understanding for the mentally ill and child prostitution and female circumcision, which happens here, though few people know it.’

Norris also decided that Holby should not be Bristol under another name and accordingly, Duffy’s West Country accent magically disappeared. Kuba was replaced by Jimmy Powell, who brought a Geordie voice to Holby and who was initially atleast as carefree as his colleagues were careworn. He quickly became popular. Other new characters included SHO Lucy Perry, who was all books and brains but no practice and compassion; Alex Spencer, a middle-class student nurse and Julie Stevens, a receptionist who liked to diagnose while she took down the names and addresses.

Dr Andrew Bower came in as a registrar who was also dating Duffy. But, as in all good soap storylines, happiness cannot last. So when Duffy discovered she was pregnant, she ended their relationship. Megan’s problems continued. Ted had ended their 25 year marriage, and she began taking tranquilisers until Charlie caught her red-handed and talked her through things. She redeemed herself and became Casualty’s super-goodie when she spoke out to the press after staff shortages led to the death of a patient.

A spectacular road accident and a terrorist bomb exploding in a department store, series 4’s first and last episodes, are probably the most memorable. The final episode, however, turned out to be schedules on the week of the remembrance service for the victims of the IRA bombing at Enniskillen. ‘We were nervous but there were no protests. I think Geraint had won those battles. Political and public attitudes had caught up with Casualty by then.’

The episodes inbetween weren’t exactly tame either. Perhaps the goriest sight was the monk who, it turned out, had been punishing himself by wearing a belt of nails. The humour darkened too in some stories. When a young man was brought in with head injuries Charlie advised him ‘Don’t blow your nose or your brains will come out.’

The new night, later slot and strong stories didn’t deter viewers. Far from it. Audiences grew to more than 13 million.

In this article:Cas Series 4, Casualty Series