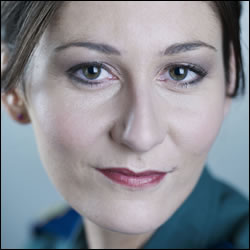 Snezana is known as Zana by the gang. From Serbia, Snezana can be easily misunderstood, for being so serious and focused. But sometimes she just doesn’t understand the banter between the team members. She comes across as very serious, but in fact is very warm. She is also very private, and doesn’t initially reveal much about her personal circumstances – leaving others guessing.

Snezana starts her first shift in S22 E26, but a hungover Dixie is in no mood to be dealing with a new recruit and deems her to serious. The pair conflict over the treatment of Maggie’s daughter who has gone into labour however Snezana gets the opportunity to prove her worth. In S22 E42, Snezana is visibly upset when a man kills himself with an overdose. Jeff suspects that Snezana is using drugs herself and confides in Curtis, who says he can call in a favour to get a test done on her blood. Jeff is unsure, but when he discovers some morphine is missing, he agrees to Curtis’s plan. But he feels guilty when the tests come back clean. In S22 E45, Snezana is revealed to be the mystery medicine thief when Jeff catches her red-handed. He can’t bring himself to report her when she tells him he will be hurting people who need her help but he insists there must be no more thefts. In S22 E46, suspicious of Snezana’s recent behaviour, Jeff decides to follow her and ends up at a settler’s camp full of illegal Serbian immigrants. A shocked Jeff discovers that Snezana has been treating the entire community, and decides he can’t stand by and watch her put herself and the immigrants in danger. When one of the settlers is injured, Jeff manages to save them by improvising with Snezana’s illegal supplies. Jeff and Snezana argue and she reveals that she has a 12-year-old daughter back in Serbia. Jeff makes a pact with Snezana to keep her secret – if she destroys all of the medicine. In S22 E47, Snezana’s asthmatic friend, Marko, begs her for drugs but she refuses to treat him, telling him to go to the Emergency Department. Later, Jeff and Snezana are called to a quarry and Snezana is distraught when she finds Marko trapped in a truck, amid falling rubble. The storyline continues in S22 E48, as Snezana and Jeff are caught in the landslide and struggle to save themselves and the workers. Marko, particularly, is severely injured and makes Snezana promise to take his daughter, Natasha, back to Serbia if he doesn’t pull through. When he dies, Snezana manage to convince Maggie to take Natasha home.

In S23 E10, Snezana is horrified to discover that all the money she had in her locker has been stolen (by Abby – a patient, Zoe has befriended). Next episode she accuses Abby. In S23 E27, Snezana’s daughter, Maja, visits Holby but alarms her mother after disappearing with Louis to Snezana’s plush but fake apartment. When the real owners return home, Snezana is forced to reveal that she really lives in a bedsit, showing Maja, Louis and Charlie the sacrifices she is making in order to finance her daughter’s education. In S23 E31, Snezana realises her sacrifices mean she is missing out on her daughter growing up and decides to quit Holby.