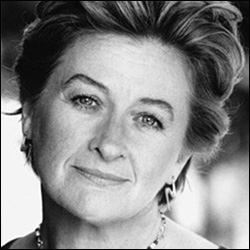 PARTNER : Long term partner, actor Nigel Cook (works with the Royal Shakespeare Company), they have been together over 20 years.

CHILDREN : One son, Liam and one daughter, Beth.

STUDIED : Went to University in Dublin and went on to train as a teacher – she taught Irish, English and Latin to middle and secondary school children – trying to avoid becoming an actress. But while a poor student, she took on acting work because she needed the money.

HOW SHE RELAXES : She visits West Point in County Mayo, Ireland. ‘It’s a very cleansing experience. Fresh food and fruit and long walks. It gives you time to appreciate all the beauty about you.’

ON CHARACTER KATE : ‘She is not very tolerant of other staff who don’t live up to her standards, she is there to represent the old style caring face of the NHS, she is dedicated and caring.. I wanted her to be a bit ratty, but they insisted she had to be ‘comforting’ so that everyone watching would think, oh good when I go on the NHS, I’ll be looked after by a nice Irish nurse.’

ON HER LEAVING : The cast gave her an old fashioned bike, ‘I think they wanted to be sure I was ‘on my bike’ and off the premises!’

WHY SHE LEFT CASUALTY : ‘I suddenly realised that I’d been doing Casualty for 3 and a half years and it meant I was a visitor in my own life, my children’s lives were moving on, they were becoming young adults and I was missing it.’

ON HER CHILDHOOD : ‘What a privileged upbringing we had.. I always feel you should have been wayward and rebellious – but I wasn’t really.’

ON SISTER RIVALRY : ‘There’s no competition between us and I don’t really want to be in the spotlight with all the intrusion it brings.’

FILM CREDITS : Angel; A Hitch in Time; Diamonds; One of the Hollywood Ten; Snatch; The First Snow of Winter; Snatch; Do Armed Robbers Have Affairs?; Lost Christmas; Middletown; Rabbit Fever

THEATRE CREDITS : Action Replay; The Cherry Orchard; Lower Depths; A Doll’s House; The Devils; Much Ado; Plough and the Stars; John Bull’s Other Island; Duchess of Malfi; Detective Story; Anthony and Cleopatra; Roaring Girl; Three Sisters; Les Liaisons Dangeuresuses; Baglady; Carthaginians; Three Sisters; Playboy of the Western World; Dancing at Lughnasa; The Odd Woman; Smoke; Freedom of the City; Give me Your Answer Do; The Feast of Snails