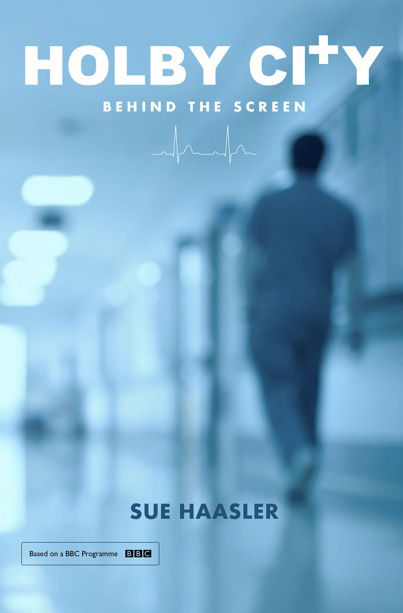 After 20 series of CASUALTY’s sister show, HOLBY CITY which first aired in January 1999, the medical drama gets it’s first ever book which was released on Friday 2nd March.

Written by author Sue Haasler, who is also well known as the creator of PauseLiveAction blog, the book delves into the behind the scenes of one of our favourite shows.

Kindly Sue gave holby.tv more of an insight into the much anticipated book…

Are you excited about the release of Holby City’s first book?

I’m really excited to be the author of the first book on Holby City. A couple of books have been written about Casualty a few years ago, but I thought it was about time Holby had it’s own book!

How were you approached to write it?

Because of my Pauseliveaction blogs I was invited to a Holby story conference for series 16, to give some input to the writers as a fan. A couple of years after that I was asked to visit the studio to talk to Oliver Kent, Simon Harper and Kate Hall, again with a fan’s perspective on storylines and characters.

Kate also very kindly showed me around the Keller and AAU sets. It was this visit that gave me the idea to write a book, and when I approached Ollie, Simon and Kate with the suggestion they were all very enthusiastic.

How long has it taken to write?

The actual writing didn’t take long at all, but the difficult part was scheduling interviews with the actors. They all work very long hours, and when they’re at the studio they’re working from early morning to late evening with maybe only a short break for lunch. Then of course people have holidays and so on. So the interviews were spread over quite a few weeks.

Luckily I live very close to the studio so it wasn’t a problem to pop in and out. All the people I spoke to were very generous with their time and everyone was really friendly. The whole experience was lovely.

What can fans look forward to seeing from the book?

The book lifts the lid on exactly what goes into making each episode, from the first story ideas to the show you see every Tuesday night. I talked to as many people as possible, from the writers, producers and directors to the people who make the prosthetics, the medical advisors, post production, makeup, costume – and of course the actors.

I met all the regular cast members who were in series 19, although Chizzy Akudolu and Lucinda Dryzek had already left by the time I started the actual interviews. I talked to Catherine Russell on the phone, as she was preparing for her European camper van trip.

What were your favourite parts to research?

I genuinely loved every bit of it, but one of the most fun mornings was spent with dubbing mixer Mike Narduzzo, who is the man who makes Holby sound like Holby.

The whole subject of the sound of it wasn’t something I’d ever given much thought to, but it’s a really interesting process. For example, during the wedding of Mr T and Inga, they couldn’t shoot the dancing scenes with any music playing, because that would make editing the scene really difficult, so the dancing was all done in silence.

I watched it in Mike’s studio on a massive screen, and there were all the actors shuffling along silently! It looked very odd until Mike added the music and also some ‘dancing feet’ sound effects he’d had in his library since he used to work on ‘Hi Di Hi’; I found all of that fascinating.

Did you get to watch any filming? What was this like?

I was lucky enough to watch filming on all three wards – a scene in the AAU trauma unit with Fletch, Morven, Bernie and Jasmine; Jac and Mo doing a walk and talk on Darwin; and Sacha and Essie on Keller. I was amazed at how small the trauma unit space was to film in, and how much work goes into setting up each shot.

I was there in the room as they were filming a scene for maybe 20 minutes, and the bit that I saw being filmed lasted only seconds on the screen – it was just one angle of the scene, too, a close-up on Fletch.

It was also fun to see how the actors and the crew laugh and joke in between takes, but as soon as the camera is rolling they’re completely focused. It’s such teamwork, too, with everybody helping each other to get the very best performance they can.

They were all really lovely – very generous with their time, kind and welcoming. I’d met Rob Ostlere, Ellie Fanyinka and David Ames at a screening of the Digby dying episode and they were so friendly, so that put me at my ease before I even started the interviewing process.

The first person I sat down to talk to about the book was John Michie, which could have been daunting given that his on-screen persona of Guy Self is quite fierce, but of course he’s so professional and used to giving interviews, and he was lovely. They all were – I was very pleased and privileged to be able to spend some time with them.

Were there any other interesting facts you learnt from your time researching Holby?

So many I couldn’t really list them – you’d need to read the book! Just the sheer amount of work and attention to detail that goes into every episode is mind-boggling. I was left in complete awe of these amazingly talented people, both in front of the cameras and behind the scenes.

And the fact that the working atmosphere they create is genuinely like a family. Everybody says it, and it’s completely true.

You’re also known for your online Holby episode reviews – do you enjoy doing these?

I love it, because I love Holby. Even if I’m occasionally a bit critical I think all my reviews are done out of genuine love for the show. I wouldn’t do it otherwise. 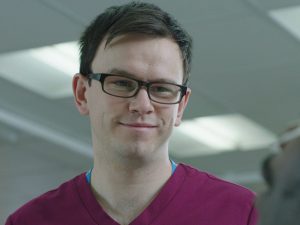 As a fan of the show, do you have any personal favourite characters and storylines from Holby?

Anyone who reads my reviews will know the answer to this – I have a deep and abiding love for Joseph Byrne and I loved the whole Joseph/Jac/Faye/Linden storyline.

The storyline about Arthur Digby’s cancer and his death was obviously a huge and memorable one, which gets a chapter of its own in the book. I loved seeing Rob Ostlere back as a ghost in the Christmas episode recently.

The show is now in it’s 20th series – why do you think the show has maintained it’s success over the years?

I think it’s the sheer quality of the writing and acting. The storylines are all character based, so you have things like the Dominic/Isaac domestic abuse, Serena and Bernie, Fletch and his kids, Mo and Mr T, and you know who these people are and why they do what they do, and you root for them and worry about them.

The classic case is, of course, Jac – we’ve seen the stuff that woman has had thrown at her over the years, so we’re on her side even when she isn’t being very nice. That’s all been built up so carefully over the years, and that’s something Holby does really well.

They have some brilliant actors, who are given brilliant stuff to act, and it’ all supported by this amazing team of talented people behind the scenes.

Holby City : Behind the Scenes is now available to buy.