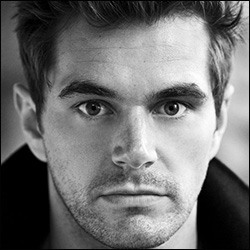 (to Sam) I’m gonna miss you.. the secondment back home

Iain is impulsive and the first to rush into a dangerous situation. He has a quick temper and a strong sense of justice which occasionally affects his behaviour.

Iain is first introduced to us as a Lance Corporal in a webisode episode, where we learn he is having an affair with his colleague Sam in Afghanistan behind Sam’s husband, Dylan‘s back. We then meet him again a few episodes later when he is a character witness at Sam’s GMC hearing. He reluctantly admits that Sam shot a civilian in Afghanistan whom she thought was armed.

Iain leaves his army days behind him, with mental scars from his platoon being blow up. He shows a reluctance to show his true feelings but behind the bravado is a caring individual.

We next meet Iain, when he joins the team as a Student Paramedic in S28 E5; Sam is shocked to see him and Tom, who is now dating Sam, has his guard up on meeting him, knowing of their history. Iain clashes with Jeff in his first few episodes, Jeff thinks he is not a team player. Dixie urges them to sort it out and after another incident, the pair begin to build bridges.

Following Jeff’s death in Series 29, Iain is asked to return as a paramedic. At first Dixie finds it difficult working with Iain, particularly because of how close she was to Jeff.

In Series 31 we also meet Iain’s wayward sister Gemma who has spent time in a young offenders institute. When she is released and unable to stay with their alcoholic mother, Iain takes her in and she even gets a job at the hospital. But things turns nasty when she accidentally runs over Lily. Iain offers to stand by her but Gemma realises she needs to own up to what she did.

In the romance department, we see Iain have a relationship with nurse Rita in Series 30. Iain struggles with commitment and eventually cools it off with Rita. A will-they-won’t-they love story happens between Iain and Lily in Series 31 – the pair are so different but similar in their lack of being able to communicate how they really feel about eachother. By the next series – with Sam also back in Holby as a paramedic which puts Lily’s back up, when Iain eventually tells her how he feels – Lily has decided to leave for a job in Hong Kong.

Things take a turn in Series 32 when a series of events including the death of his colleague Sam lead Iain on a downward spiral and eventually attempting to take his own life. He survives but it’s a battle to keep his mental health in check.