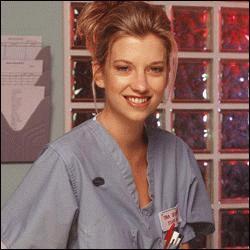 What do you want me to do?

Tina Seabrook joined the team in at the start of Series 12 as a replacement for nurse Jude. She soon strikes up a friendship with Sunny and Sam, leading some of their colleges to feel Tina is leading Sam astray. Tina is a good nurse who works well with people, even if she does sometimes have a lot to learn.

Tina made her first appearance in S12 E1 as one of several new team members. In S12 E3 she has to be reprimanded by Charlie for dealing sharply with an elderly man who insisted on telling her how to do her job. And in S12 E6 she calls Social Services about a boy working illegally, but later comes to regret it when his mother arrives. Again in S12 E10 Tina requires help from Kate when bandaging a mans hand. Later, when Tina thanks Kate for her help, she tells her if she does the same job for twenty years, she’ll wonder if that’s all there is to her life. During this time Tina remains oblivious to Sunny’s crush on her, which comes to a head when Amy arranges a blind date for them in S12 E19, without telling them who their date is. In S12 E20, it’s the night of Tina and Sunny’s date, but Amy and Keith pull out at the last minute. In the department, Edmund White brings his wife in after she falls, and he begins to use Tina as a sounding board and she responds sympathetically. Later, after Eve reprimands her for getting too involved, she tells White that he should see a counsellor. However, after Tina’s shift finishes, White grabs her, and in a dark room in the hospital, rapes her.

In S12 E21, Tina returns to work following the rape, but when Sam notices the bruises on her wrist she panics and says she was mugged. She later returns home and cries, deeply affected by what has happened to her but unable to tell anyone. The next day, S12 E22, Sunny’s sister Karen is bought in, having been beaten by her boyfriend. Tina is assigned to treat her, but finds the situation hard to deal with. Later, as she takes Karen to the toilets she panics and flees, leaving her there. Eve finds her in the staff room and confronts Tina about her behaviour. It soon becomes clear that something more has happened and when pressed, Tina finally breaks down and tells Eve that she was raped. Eve is shocked and convinces Tina to tell everyone, but Tina’s worried and blames herself. Eve comforts her and takes her home, telling Tina she’ll get through it, and Eve will be there for her.

In S12 E23 Karen comes back into the department and tells Tina she’s left her abusive boyfriend. Talking to Karen makes Tina decide to press charges. But Eve later finds out that the security tapes are useless, and without them the chances of securing a conviction are slim. After the rape Tina moves in with Sam and Sunny slowly begins to get her confidence back. And in S12 E26 she joins the rest of the gang as they sing ‘Everlasting Love’ to Baz and Charlie at their wedding.

By Series 13, Tina is almost back to her old self and in S13 E2 she thanks Sam for all his help but says she needs to find a place of her own, and despite Sunny’s attempt to convince her otherwise, by S13 E3 Tina has agreed to find a place with new nurse Chloe. On the night of their housewarming in S13 E4 however, one of Tina’s friends, Simon Leyland, is bought in and later dies in Resus. Tina reluctantly agrees to go ahead with the party at Chloe’s insistence, and later ends the night dancing with Sean Maddox. It becomes clear that Tina’s attack is still fresh in S13 E9 when she says that abusive men should be castrated. Chloe tells Duffy that she thinks this is a bit strong, but when Duffy replies that Chloe can’t understand, she’s never been raped, it becomes clear that Tina has been. Chloe confronts Tina and asks why she didn’t tell her, but Tina says it’s something she needs to deal with on her own.

In S13 E13 Tina and Sean’s friendship begins to develop when Tina comforts him after he finds out he is being sued for negligence. In S13 E16, Tina plucks up the courage and asks Sean out for a drink, he responds by asking her back to his. S13 E17 is the Christmas party, and while Tina wants to tell everyone about her and Sean, he insists they keep it quiet until the case is over, leading Duffy to warn him not to hurt Tina. But eventually everyone knows and by S13 E22 Tina begins to worry as Sean keeps sending her flowers, unbeknown to her because of his recent fling with Chloe. But after Duffy tells Tina in S13 E24 that she doesn’t want her to get hurt by Sean, Tina realises they both want different things and in S13 E25 she breaks up with Sean. However in S13 E26, after Sean is punched by Mr Raffety, Tina patches him up and they talk. They agree to get back together and take it one step at a time. By S13 E27 Sean realises he wants more and asks Tina to move in with him, and she agrees. Her world is shattered in S13 E28, however, when she finds out that not only did Chloe and Sean sleep together, but that Chloe is pregnant with Sean’s baby.

S14 E1 picks up from where S13 ended, and Tina, as well as being hurt by Sean and Chloe is also having to cope with best friend Sam’s injuries following his fall. In S14 E2 Tina confronts Sean after overhearing his conversation with Chloe, and asks why he thinks she deserves this? Relations between Tina, Sean and Chloe remain strained with Tina even working night shifts to avoid seeing either of them. In S14 E5 she gets a break when she travels to Cornwall with Sunny to try and bring Sam back. They are involved in a bus crash on the way back, and eventually, once they arrive at Holby, Tina accepts Sam’s decision to leave, telling him saving a girls life wasn’t a bad swansong. In S14 E7 Duffy speaks to Tina about her behaviour towards Chloe, and tells her that Chloe’s booked an abortion. The next week, in S14 E8 Tina reaches out to Chloe when she offers her a lift to the hospital. The two, although far from being friends again, are at least speaking. However it wasn’t until S14 E11 that Tina and Sean start speaking again, when she tells him he hurt her, but she never thought he was callous. Sean takes this as a good sign and is happy when in S14 E15 he and Tina are selected as partners for the charity parachute jump. However Tina accidentally traps Sean’s fingers and Dr Max Gallagher takes his place – in more ways than one. After they land, Max and Tina kiss under the parachute.

The next day, S14 E16, Sean is planning on asking Tina to spend Christmas with him, but she says no. She doesn’t want that kind of relationship with him, instead it becomes clear that she wants Max, but he doesn’t know if he can be with her. During S14 E17 Tina and Max agree to spend Christmas together and later get passionate in a hospital lift. But both want to keep their relationship quiet. However, in S14 E20{, Tina and Max are getting serious and agree that they need to tell Sean. Max can’t bring himself to do it, and while kissing Tina in the staff room Sean walks in. He yells at Tina before turning his aggression onto Max. Tina can do nothing but watch as the two men in her life fight. In S14 E21 Sean and Max’s relationship is increasingly strained, which leads Max to tell Sean that one of them may need to leave. He tells Tina this, and she hugs him, saying she doesn’t want him to leave. The next day, S12 E22, it becomes clear that Tina and Sean spoke the night before and admitted their feelings for each other. Tina doesn’t want anything to happen until she’s told Max, and Sean agrees. However, when Max’s son Frank is bought in in S14 E23, and later dies in Resus, Tina realises she can’t tell him now.

Tina continues to date both Sean and Max, torn between wanting to be with Sean and not wanting to hurt Max so soon after Frank’s death. But in S14 E26, Sean tells Tina he loves her, yet later Max asks her to marry him, leaving Tina more confused than ever. In S14 E27 Sean tells Max he is leaving for Australia, and tells him he has told Tina. Later, Tina kisses him goodbye, unaware he is leaving for good. When Max asks her how she feels about Sean leaving, Tina realises what’s going on and races to the train station. After finding Sean on his train she asks him to marry her, he replies that she’s the only thing he’ll miss to which she asks, “Is that a yes?”

The next day, in S14 E28 Tina is late in to work and Max begins to realise what has been going on. At the end of her shift Tina tells Charlie she’s leaving, she needs to do this for her, or she’ll always regret it. As her and Max talk and he tells her he loves her, Tina tells him she needs to go, nothing’s stopping her and she wants to be with Sean.

In S14 E29 Tina flies to Australia to find Sean, after getting a ride to Alice Springs she runs into Byron, who knows Sean, and tells her that he’s in the Bush delivering a baby. He offers her a lift to him but halfway there Byron blacks out and ditches the car. Tina goes in search of help but begins to get dehydrated and eventually collapses, miles from anyone in the middle of the outback. Sean doesn’t realise Tina is in Australia until he and Katie, a doctor he’s working with, find Byron, Katie’s dad, and in S14 E30 when Byron comes round, he tells them about Tina. Sean races off to search for her, eventually finding her. The two of them talk, and Sean asks what if Australia isn’t what she wants, Tina replies that he’s all she wants. Sean proposes and the two of them call Holby with the good news, before walking off towards their new life.