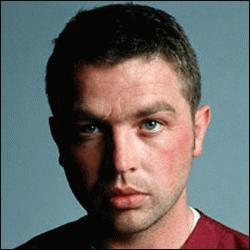 (to Anna) You should see the other bloke!

Increasing worries about violent attacks in A&E departments has meant that many hospitals now employ security guards – and Holby City Hospital is one of them. Gentle giant Tony Vincent seems the perfect blend of brawn and bonhomie to defuse tricky situations before they get out of hand, or cope with them if they do. The elder brother of receptionist Jack, Tony is glad to be gay, but hides another secret; he has been in prison for GBH, defending a mate involved in a queer-bashing fracas. He’s learned his lesson and keeps that temper on a close rein – but will his past catch up with him?

He turns up in S16 E11, with a cut head, which Anna treats, he tells her he was injured in a fight with Jack, his brother, at the gym. Anna is attracted to him, but doesn’t yet know he is gay. Unemployed Tony, helps out when an irate man, wanting to use his mobile phone, attacks Spencer – he calmly defuses the situation. In S16 E12, Tony and Jack fight at the local boxing gym, later Jack tries to persuade Charlie to put in a good reference for Tony, for the new security guard job. In S16 E14 – he starts work at A&E. In S16 E18, gay Paul O’Sullivan, a friend of Tony’s, is brought in after a night taking cocaine. Later Anna asks Tony out on a date – he tells her he’s also gay. Embarrassed, she makes the wrong impression that he does drugs and one night stands, but later apologises. Next episode, the police are sniffing round the department since Lewis’s break out, thinking it’s an inside job – Chloe is worried about getting caught and is unable to get hold of Jason. She confides in Anna, who doesn’t want to know, but loyally stands by her. Tony sees the video footage of Chloe with Jason – Anna tells him to burn it – but with his previous convictions, he’s worried the police will chase after him. In S16 E23, Jack has been tested for testicle cancer but tries to ignore the problem and tells friends he was given the all clear. Tony finds out the truth from their nan. Tony head to a club, where Jack is playing – a fight erupts and a man is stabbed in the arm with a glass bottle. The club is cleared and Tony and Jack battle to save him till the ambulance arrives. Outside the club, Tony reveals to Jack that their mother died of cancer when Jack was young – not an accident as he was told, and tells him he mustn’t ignore the problem. Jack is forced to book the operation. Next episode he support Jack, after his operation but tells him he is a fool when he splits up with Nikki. In S16 E26, a gang of youths walk into reception – they cause a disruption and steal a number of patient’s bags before running out. Jan tells Tony off, saying he should have been more aware. Tony discusses with Anna a new EDA nursing post which he was thinking of applying. He decides not to because of his past criminal convictions and throws his application form in the bin. Without him knowing, Anna takes his form and hands it to Charlie, saying he would be a suitable candidate and is later told he had got the job. He starts his first shift next episode. In S16 E29, Tony discovers two Australian women, to be bone climbers which is illegal, and when one of them threatens Lara for misdiagnosing her friend, the team back her Lara up. In S16 E31, Tony tells Dillon that he thinks he’s a closet gay, after continuous teasing – Dillon attempts to dye his hair brown in S16 E34. In S16 E40, Tony has to do his best to support his brother, Jack, when girlfriend Nikki is stabbed during her shift. 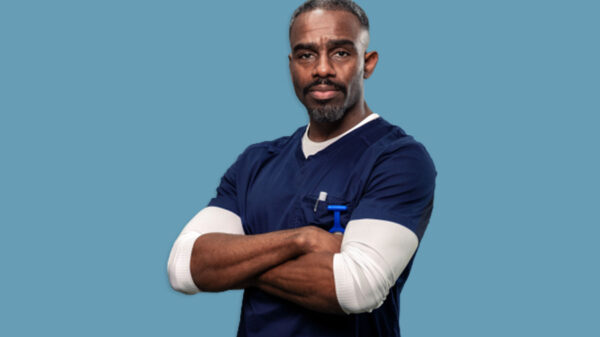