Last year was traumatic for Holby hero Dr Adam Trueman. Having to face up to the loss of baby Harry in a car accident and then the departure of Jessica, his professional and private life spiralled into chaos as he came to terms with his grief.

But towards the end of the series things started to look up for the dashing doc as he regained his healing ways. Actor Tristan Gemmill explains:

“At the end of series 24 Adam had got back on track after a very turbulent and not very happy year after the loss of Harry and a very protracted down period. But through the siege in the farmhouse and a little bit of objectivity about himself and life he started to get his mojo back.

“And now he’s really put all that misery behind him and is starting with a clean slate. He’s enjoying being a doctor again and we really hope he’s got through it”.

Taking centre stage in the traumatic events after the high school shooting, Adam is caught up not only in the medical efforts but also in the ensuing fallout.

“Adam, along with Zoe, Ruth, Lenny and Yuki, has to co-ordinate the sudden arrival of a large number of shooting victims,” explains Tristan. “Jordan isn’t around as he’s at a higher echelon meeting and, having started the day quite quietly, suddenly the ED is packed.

“Injured victims are coming in all the time and, while they’re dealing with them medically, they realise that there’s a possibility that the person who perpetrated the incident might actually be in the hospital in some capacity. There are hints every now and then and Adam feels bad that he doesn’t pick up on them as quickly as he should. But he’s snowed under with work and then he has to deal with the consequences when get even worse”.

Tristan has been involved in previous Casualty series openers, but how does this differ from earlier years?

“The last couple of years the openers have been firework spectaculars with big stunts and exteriors and lots of action,” he says. “But this year it focuses much more on the characters – you don’t see the violence of the action but the consequences of it and how the staff pick up the pieces. It’s more of a psychological thriller than an action adventure.”

Following the events of the first episode, what are the repercussions for Adam and his colleagues?

“After the chaos of this first episode, Holby City ED is dragged into the public and media spotlight and the bureaucrats start coming down on it like a ton of bricks,” explains Tristan.

“They threaten to close off the funding and start looking for scapegoats and it gets quite bitter and political so people have to try to keep their heads under the parapets. These events put the whole team in a very traumatic situation and it shows them that they have to rely on each other.”

And finally, what else is in store for Dr Adam in this series? Are there happier times ahead?

“There may be a little bit of romance in the air as Adam tries to find his happy place again,” laughs Tristan. “I certainly hope there are better times ahead for him!” 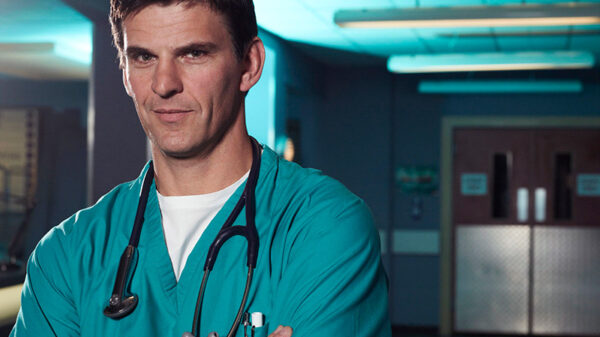