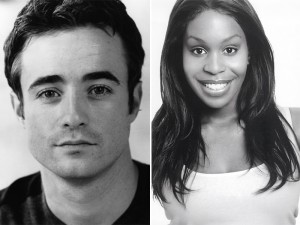 The BBC has announced that Joe McFadden and Petra Letang will be joining popular medical drama HOLBY CITY as cast regulars.

Joe will play the character of Raffaello (‘Raf’) di Lucca – a brilliant, highly driven registrar who specialises in cutting-edge resuscitation techniques that bring patients back from the brink of death. Prior to joining Holby City, Joe starred in Heartbeat, Cranford and The Crow Road and has a guest appearance in CASUALTY in 2009.

Joe says: “I’m absolutely thrilled to be joining the cast of such a successful show and becoming part of the staff at Holby City. I’m looking forward to scrubbing in and showing off Raf’s innovative lifesaving skills!”

Petra, who is well known for her roles in The Bill, Babyfather and of course EastEnders, will play Adele Effanga, HOLBY CITY’s first regular Healthcare Assistant, who previously worked as a holiday rep and is the mischievous little sister of Mo. Petra says: “Holby here I come! I can’t wait! I’m really excited about causing a bit of mischief and bringing some fun to the wards. I’ll be playing Mo Effanga’s sister so viewers can expect to see some sisterly love and maybe some sibling rivalry!”

Joe, Petra and Dominic will be joining some other new faces in the Holby City cast. Also recently joining the team are John Michie (Coronation Street, Taggart) and Louise Delamere (No Angels, Torchwood, Waterloo Road) who will play consultant neurosurgeon Guy Self and Holby’s new Director of Nursing, Colette Sheward. David Ames has also been announced the be returning in his role of Dominic.

Oliver Kent, Executive Producer of Holby City, says: “We have some great storylines coming up, and the arrival of Raf, Adele and Dominic will definitely shake things up at Holby City. These characters will be played by very talented actors and I know Holby fans – old and new – will warm to them instantly.”

In this article:Joe McFadden, Petra Letang