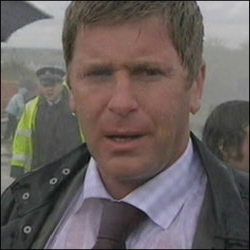 Charming and good looking, we are introduced to Selena’s newly-married husband in S19 E1, as he helps to investigate the disappearance of two young children. In S19 E4, it’s Selena’s first day as the new doctor in the ED but, realising she has forgotten her hepatitis B vaccination certificate, she goes home to get it. She gets a nasty shock when she catches her husband, Will, there with receptionist Bex. Selena is heartbroken. In S19 E6, Selena is furious when Will turns up at work with a bunch of flowers. She bins them and tells him to leave her alone. In S19 E30, Will is investigating a murder on a farm. Later, Selena has to spend the day with Will on her police doctor shift when she gets a call to certify the death of a man, at the farm after the original incident has taken place. Things are frosty between the pair at first, especially when the policewoman working with Will makes snide comments to Selena. Selena turns detective when she helps Will solve the murder. At the end of the day Will tells Selena he wants them to try again – he says he was seeing the policewoman but that the relationship is over. Selena realises she needs to move on and tells him she wants a divorce. In S19 E40, Selena is working her police surgeon shift. She is dismayed to see she will be working with Will, who is pleased to see her again. Will is working on a case involving drug traffickers and Selena is called to identify the body of a woman. Selena pressures Will into signing the divorce papers, he is dismissive and instead asks her to dinner. Later Selena receives a call asking her to attend another crime scene and is held hostage. Selena phones Will pretending she is asking another doctor for advice. Will realises something is afoot and tracks Selena down. He bursts in and rescues Selena. Will takes Selena to her flat and comforts her. When he offers to sleep on the couch that night she breaks down. In S19 E41, Will comes to the hospital and tells Selena that he still wants to get back with her, Selena does not want to talk about it. Later Selena is stabbed by one of the drug traffickers that escaped in the hospital car park. In S19 E42, Will makes breakfast for a mystery woman, he listens to his answer machine and hears he has a message from Harry, telling him Selena has been attacked. The woman on his balcony turns around – it is Ellen. Will rushes to the hospital to check on Selena. Harry sees him and asks why he did not come in earlier – Will lies that he was working and only just got the message. Harry tells him Selena was stabbed in the stomach and lost a lot of blood. Will visits Selena, afterwards Will tells him he wants to go for dinner with Harry and Selena to thank Harry for saving her life. Will implies that Selena and Will are back together. Harry is angry and says he knows that Will was lying about working – Harry called the station and they told him he had a night off. Will admits he was with a woman he had met in a bar but that he only wants Selena. He tells Harry it is over and there is no need to tell Selena about it. Ellen turns up at work, asking why Will has not answered her calls. In S19 E43, Will comes in to investigate Claire’s brother, Pete’s death. Luke and Charlie are both covering up for Bex, whilst the security guard slips the CCTV footage to Luke. In S19 E47, Will comes in to see Selena. He tells her he is taking her away for the weekend, but she says she is busy and cannot leave work yet – much to his annoyance. Later, Selena collapses with an abscess on her wound. Harry looks for Will and finds him in an uncompromising position with Ellen. In S19 E48, Harry tells Will that Selena has MRSA and her condition is serious. Later, Will ends his affair with Ellen.

In S20 E4, Will ignores Ellen’s calls so the mischievous nurse hatches a plan to win him back when she discovers Selena is being discharged from hospital, by making Selena catch Ellen at his house in her negligee. However, her meddling soon backfires and it leaves both Selena and Ellen heartbroken. In S20 E5, Will comes in desperate to see Selena and she agrees to go to lunch with him. When she sees a nurse carrying a urine sample, she decides the perfect revenge – to pour it over his head.

In this article:Gary Mavers, Series 19 Cast, Will Manning