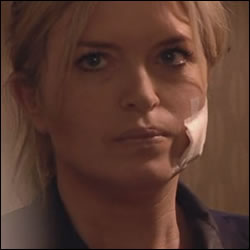 After his attack on Chrissie, Stuart lies to Connie and the other staff claiming that Chrissie is mad and slashed her own face. But Connie is suspicious and makes sure Stuart remains on-site by getting him involved in a transplant. Meanwhile, a scared Chrissie goes into hiding while desperately trying to contact her dad, Mark.

Connie soon realises that it was Stuart who attacked Chrissie and hatches a plan with Chrissie to set him up. Stuart turns up at Connie’s office to find Chrissie, and his true colours are revealed and recorded on a webcam. Stuart makes a run for it and, after a parting shot from Sam, the police arrive and Stuart is arrested.

Elsewhere, Ric is having some embarrassing cashflow problems and, after uncovering further NHS faults, he agrees to join Michael’s private practice. Also, Linden carries out yet another risky operation on AAU, and upsets both Mark and Lola.