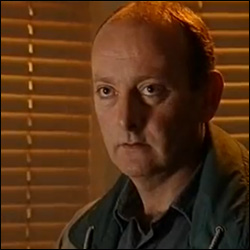 Two feuding extended families appear en masse in casualty, with a variety of injuries. They continue fighting until a chase ensues and the son of one family is pushed off the first floor balcony. This shock sobers them all.

A boy is brought in with a broken collar bone, and Richard suspects abuse. It turns out not to be so; the boy fell downstairs after walking in on his father and uncle ‘together’.

It is only a week since Josh lost his family, he is off work but comes in to ask Baz how much pain they would have suffered. She tries to comfort him. Matt announces he is off to Crete, telling Jude he is only going because he felt there was nothing left for him here after the abortion.

In this article:Cas Series 11, Tony McHale